Interview with Dr Ladislav Kabelka, chair of the organising committee for EAPC 2013 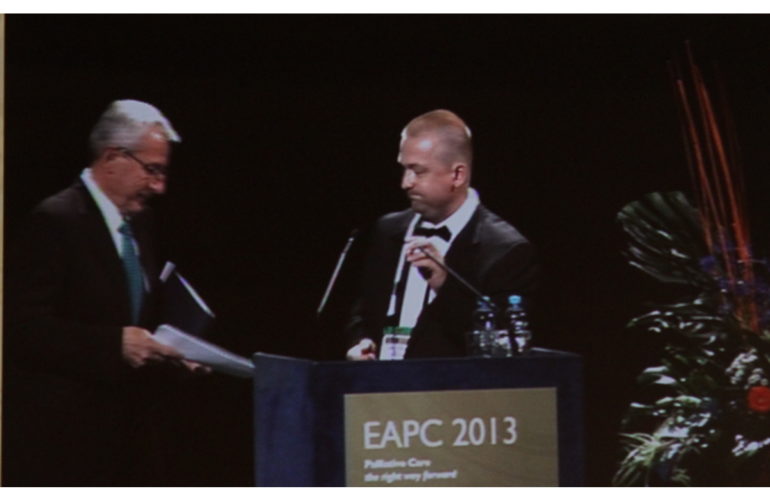 Can you tell me about your experience of preparing for EAPC 2013?

In 2009 I was invited to the Leadership Development Initiative with my colleague Dr Ondrej Slama from the Czech Medical Society. In this programme we each had a mentor, and my mentor was Professor Lukas Radbruch. At that time he was the president of the EAPC.
Prof Radbruch and I discussed the future of palliative care in the Czech Republic. We discussed the possibility of holding this congress in Prague.

I asked him what this would mean for us, and he told me that it would mean some work, but not so much. He said that I would need to empower the hearts of the people around me to make sure that the event would be a success.

He asked me to prepare a presentation about Prague to be presented to the board of directors of the EAPC. I prepared this along with the people from the congress centre, as we needed to find a venue that was big enough to hold the number of people who would attend the event.

After the board’s decision, we had a meeting in Prague with people from the EAPC.

In September 2011, Prof Radbruch advised me that I would have to hire an assistant. To have someone who would be my head and hands and who would take care of anything that came through my email. Someone who would be a good organiser and who could communicate well in English.

We invited several people to interview for the job, Marta Duchonova was one of these. It was the first time ever that I had decided within the first minute of meeting someone that she was the right person for the job.

Then towards the end of 2011, we started to prepare the group of people who would form the local organising committee.

We included on this committee people who would be able to take the information about palliative care to people who were influential in Czech society.

We received from the EAPC some schedules of what it would be necessary to do, although we did not receive a direct list of tasks.

My advice to anyone who will organise an EAPC Congress would be: You have to ask the EAPC as much as possible from the first day. You must try to describe exactly what will be your responsibility before, during and after the Congress.

Lukas Radbruch is a very well organised person with great knowledge and experience, not only in palliative care, but also in organising conferences. His help and advice was invaluable in the organisation of this event.

The experience of organising this congress has influenced my skills and experience very much.

In the Czech Republic, there have been a small group of several people involved in this field and have been working for many years, but after we formed the Czech Society for Palliative Medicine in February 2009, and after it had been recognised, many things became easier. For example, negotiations with government, with pharmaceutical companies and other bodies became much easier once we were together as a group.

This Congress was like a gift from God for palliative care in the Czech Republic.

Yes, in the beginning, I thought that this Congress will be the goal, that making the Congress happen will be the last step.

Then, very often in the past months, I would catch myself thinking that perhaps this is actually only the first step.

Now I can see that I have taken many journeys in leadership, in organisation of care, in relationships which meant empowering the hearts around me.

I hope that my experience can be the motivation for others to cooperate with the EAPC. At the first step, I thought that it would not be possible to do this. In our Society, we have organised conferences for about 500 people, here at the EAPC congress, we have almost 3,000 people attending. So even though it seemed impossible at the beginning, we achieved it and it has been a success.

I think that the congress has helped to bring us into the likes and interests of many people in different organisations and decision-makers in our country.

This can be used for the future, to have open hearts and open minds about palliative care.

I think that we don’t know what influence these meetings will mean for our lives in the future. I imagine that this is the opportunity to change something.

For example, I met Frank Ferris in Salzberg at the Open Society Foundation EPIC meeting. This influenced my thinking about the power of leadership and the power of education.

Frank Ferris told me that you must “Use yourself as a tool of change,” and I only understood years later what he meant by this. Leadership is being able to influence in people new ideas for the future.

Unfortunately, in the Czech Republic, the government ministers have a very short term, but what we can hope for is to go step by step; to prepare an environment which will keep palliative care in the mind of the government, no matter which minister is in office.