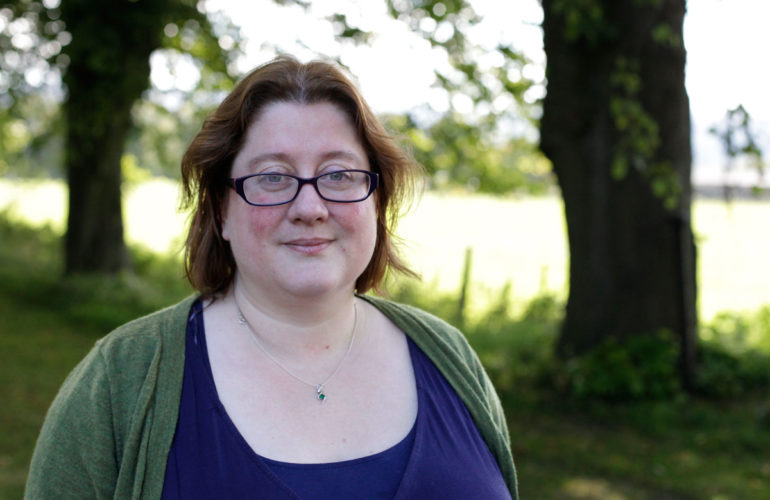 I’ve worked for the charity Parkinson’s UK for the last eight years. In that time I have met hundreds of people whose reality is dominated by the emotional and physical demands of living with this complex, incurable, highly individual condition.

I have been fortunate, and very privileged, that ordinary people have been so open and willing to share highly personal information. Their insights and experiences enable me to do my job – making the links between public policy and its impact on people living with Parkinson’s in Scotland and the rest of the UK.

Earlier this year, a survey showed that many people living with Parkinson’s in the UK felt “invisible”. This ought not to be the case – 10,000 people live with Parkinson’s in Scotland, and 127,000 in the UK. Worldwide, the numbers reach around 7.5 million, and it accounts for an estimated 0.1% of all disability adjusted life years globally (1).  That is a lot of people, including some very famous faces – Michael J Fox, Billy Connolly, Muhammad Ali.

A real lack of visibility

Yet when it comes to living with Parkinson’s, there is a real lack of visibility. Misconceptions about the condition are common, both from the general public and from health and care professionals.

Parkinson’s is usually seen as a disorder affecting movement – and traditionally that is how doctors measure its progress – but people living with Parkinson’s often report that hidden symptoms including pain, bladder and bowel issues, sleep problems, anxiety, depression, hallucinations and dementia have the biggest impact on their lives.

For people with advanced Parkinson’s, their condition has advanced to the point that they are very severely affected, and are often very unwell. In the UK, it’s estimated that around half of people are at a stage in their condition where medication is no longer able to manage their motor symptoms effectively(2), and at least one in every seven are thought to be in the so-called palliative phase(3) where people are unable to tolerate the dopamine required to manage their symptoms, are unsuitable for surgery, and have other serious conditions alongside their Parkinson’s.

I have recently been working on access to surgery and medication for people with advanced Parkinson’s, and have been shocked to hear about the reality of things that I had read about.

The research papers had told me that people with advanced Parkinson’s report quality of life as bad as – and in some cases worse than – people with conditions that are more commonly associated with specialist palliative care, such as those with terminal cancer(4) and motor neurone disease (MND)(4). I had seen the study reporting that 89% of people with Parkinson’s experience pain(6).

But none of this prepared me for the real life stories I heard. The man who was taking tablets every 90 minutes, but was still experiencing paralysing cramps, leaving him writhing on the floor in pain and violent uncontrolled movements that meant he couldn’t hold anything in his hands.

The man who had lost several stone in weight and was confined to his bed. The man, confined to bed with advanced Parkinson’s and dementia, whose wife was providing 24/7 care at home without any social care support at all.

The man whose bladder was full to bursting point but with untreated retention. The care home resident with severe pain who frequently suffered for hours at a time because workers were too busy to give him his pain relief.

None of these individuals were receiving what we would recognise as palliative care, either from specialists or from generalists. They are harrowing tales, but it is hard to tell just how representative these experiences are.

Taken alongside work undertaken in the early 2000s, however, they suggest that it remains the case that people with Parkinson’s often do not have their care needs recognised, much less met, especially towards the end of life(7).

Research shows that people with Parkinson’s are very much less likely to have been involved in advance care planning, or to have received specialist palliative care input than those with other types of condition(8)(9)(10).

This reflects wider work showing that people with non-malignant conditions are very unlikely to received specialist palliative care input at all, such as work by Audit Scotland(11) and Marie Curie(12).

Perhaps surprisingly, Parkinson’s is by some measure the most frequently mentioned neurodegenerative condition on UK death certificates.

In 2008, 7,683 death certificates in England mentioned Parkinson’s, about five times as many as for Motor Neurone Disease (MND) and Multiple Sclerosis (MS) (13).

All of this indicates that the level of unmet need for palliative and end of life care for people with Parkinson’s in the UK is likely to be very high.

This is despite recognition from the WHO in its Global Atlas of Palliative Care that Parkinson’s is a condition that can benefit from palliative care (17), in a high income country that has recently been ranked as having the best palliative and end of life care provision in the world (18), with respected clinical guidance recommending that people with Parkinson’s can benefit from palliative care from the point of diagnosis onwards(19).

It shows how far we have to go to realise the ambitions outlined in the historic 2014 resolution adopted by the World Health Assembly affirming for the first time that governments have a legal obligation to provide palliative care to people who need it (20).

Given the stark global inequalities in palliative care provision between most high income countries and most middle and low income countries (21), it is likely that the unmet needs of people with conditions that have traditionally formed part of the development of palliative and end of life care will be addressed first. Those with neurodegenerative conditions, including Parkinson’s may be waiting a long while.

I have been thinking about some of the issues that mean that the care needs of people with advanced Parkinson’s remain hidden in countries like Scotland.

Adults of all ages can be affected by Parkinson’s, but those who die with it typically have an almost perfect combination of demographic factors causing them to be overlooked as candidates for specialist palliative and end of life care – old age, cognitive decline, mental ill health, complex disability.

In Scotland, over 80% of those dying with advanced Parkinson’s are aged over 75. Many of them will have been effectively silenced by a condition that takes away the ability to speak, as well as to move, as it advances. Dementia is extremely common.

People with advanced Parkinson’s are rarely visible in our communities because they are unable to move for hours each day. Some are confined to bed, most rarely leave their home, care home or hospital.

The immobility point is critical, because it means that they become invisible to the specialist services that have supported them through their Parkinson’s journey.

It is common for people to stop receiving specialist care when they become too unwell to attend hospital clinics. At the very point when people most need expert care from professionals who have insight into their condition and the complex medication needed to treat it, too many people lose touch with their specialist Parkinson’s teams.

People with advanced Parkinson’s are not considered to have a terminal condition, because they typically follow a trajectory of prolonged dwindling. They are left to overstretched primary care teams in the community, and to social care workers who are unable to undertake nursing or medical care.

These teams are under immense pressure. In some parts of Scotland, and the rest of the UK, it is nigh-on impossible to secure a basic social care package, because there is a shortage of people prepared to work for low wages in the social care sector when alternative employment is available in supermarkets or call centres.

Where social care is available, it is metred out in 15 minute homecare visits, or massively overstretched ratios of care home residents to staff. The burden of care falls increasingly on families and others close to the person who needs care. In some cases it can be so difficult to get someone’s basic and immediate care needs met that holistic end of life support is an impossibility.

I believe that palliative and end of life care should become “everyone’s business,” a core part of health and social care provision. As the Scottish Government considers its Framework for Action on Palliative and End of Life Care, there is an opportunity to make it so. But to make meaningful change, we need resources as well as training, commitment and leadership to improve care and support for people living and dying with advanced Parkinson’s in Scotland.

Tanith Muller is the Parliamentary and Campaigns Manager for Parkinson’s UK in Scotland.