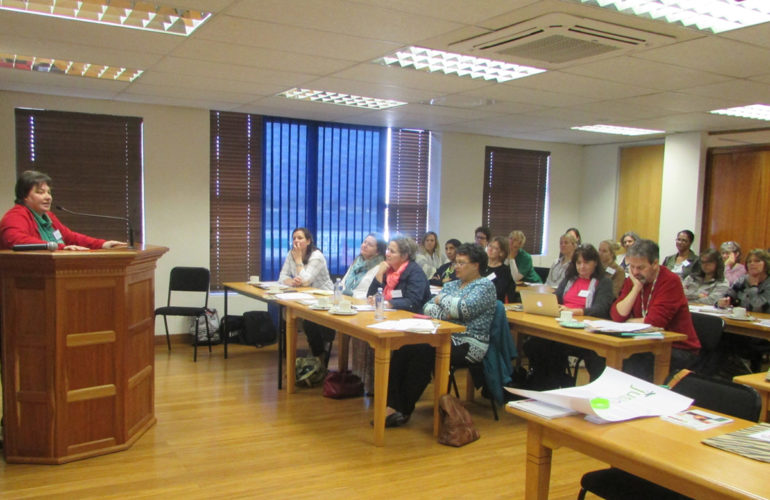 A one-day seminar on children’s palliative care took place on Thursday 25 August at the RMC Conference Centre in Stonefountain Terrace, opposite Red Cross Memorial Children’s Hospital in Cape Town. Attended by 40 doctors, nurses and associated health professionals, the day gave insights into providing palliative care for children in the developing world, looking at similarities and differences in India and South Africa. The programme also included the role of radiotherapy and chemotherapy in children’s palliative care as well as some complementary therapies.

The seminar was organised by PatchSA, the national children’s palliative care umbrella organisation and PaedsPal Cape Town with invited presenter, Professor Maryann Muckaden from Mumbai, India. Professor Muckaden is the Head of Department of Palliative Medicine at the Tata Memorial Hospital in Mumbai, President of the Indian Association of Palliative Care and immediate past Chair of the Board of Trustees of the ICPCN.

The late afternoon session on the day looked at complementary therapies beneficial in children’s palliative care and these were presented by Prof Maryann Muckaden, speaking on complementary therapies used in India, Sue Boucher, talking on play therapy, Angela Rackstraw who spoke on Art Therapy and Fiona McLennan who gave some very interesting information on the use of aromatherapy with children receiving palliative care.

After a quick outline of the history of children’s palliative care development in South Africa leading onto the topic of ‘Pearls and Pitfalls’ in providing palliative care in developing countries, Dr Michelle Meiring said she had learned the following:

Complementary therapies
The final session of the afternoon was dedicated to complementary therapies beneficial in children’s palliative care. These are not usually taught in medicals schools nor routinely offered in hospitals. Professor Muckaden described therapies based on different philosophies and beliefs in India and used for healing body, mind, emotions and spirits. These included the use of herbs, dietary supplements, minerals, vitamins, essences and aromatherapy, Reiki, acupuncture, diet and meditation.

She explained that these complementary therapies aim to reduce stress/toxins, increase well-being, manage symptoms, prevent disease and bring inner peace and harmony. Prof Muckaden also described the important work of Ayurveda doctors in India, explaining that these doctors were fully recognised by the Indian Medical Association and practise as doctors in her country. While not recommending severe restrictions, she spoke of a child patient with Acute Myeloid Leukaemia who has unexpectedly survived for the past 2 years and continues to live with dietary restrictions.

Sue Boucher spoke on the vital role of play in improving the quality of life of children with a life limiting illness and reminded health professionals that it is a language that children use to communicate their anxieties and the way they regulate their emotional reactions to stressful situations.

Angela Rackstraw presented on the art therapy work she has done in hospitals with sick children and showed the audience examples of meaning art pieces produced by these children.

To end the day, Fiona McLennan gave the audience some wonderful essential oils to smell and described the way in which aromatherapy massage has improved the lives of the children she works with at Red Cross Memorial Children’s Hospital and at PaedsPal.

After the full day of presentations, participants were invited to experience some art therapy and exercise their creativity by drawing or painting a picture.

This article originally appeared on the International Children’s edition of ehospice.