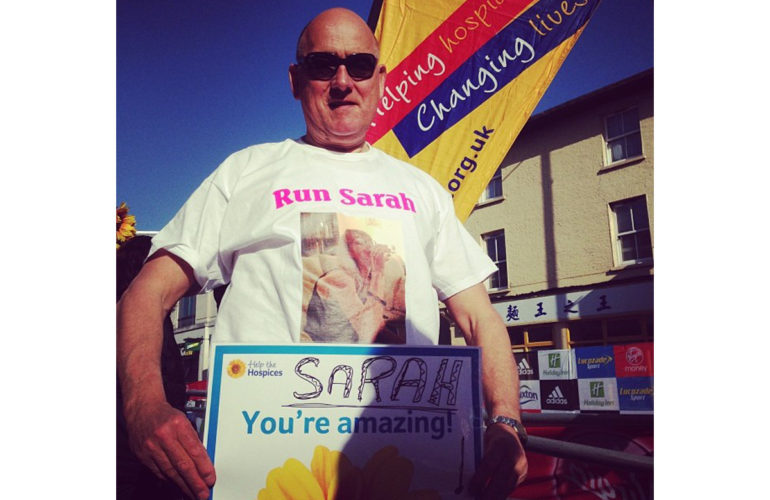 Who are you supporting today?

And is she running for anybody special?

She’s running for the hospices. And she’s running for her gran who used a hospice in Mansfield in Nottingham a couple of years ago and it moved her quite a lot, so she decided to raise some money for them.

When did she decide to run the marathon?

About six months ago.

I’ve always run regularly and last September I was doing the Robin Hood Half Marathon in Nottingham, and Sarah’s never run before, she’s always been to the gym instead. Then the evening before the Robin Hood Marathon, she was up staying with us in Nottingham, and came sidling into the study where I was sitting in the evening and said: “I’ve got a confession to make.” So I said, “Oh, what’s that?” and she said, “I’m running with you tomorrow.”

Unbeknown to all of us, she’d actually entered the Robin Hood. So she ran her first half marathon on Nottingham, and that really gave her the taste.

We were quite shocked, because we’d never seen her do this before. Since then she’s done two or three other half marathons and some longer runs. This is something that she really wanted to do for the hospice when she heard about it. So she really is thrilled, and we’re thrilled for her.

And did she beat your time in the Robin Hood marathon?

I have a terrible confession to make which is that she actually beat me by about 15 minutes. And I was so embarrassed, because I’ve been running all my life and its the first time she’s ever done it.

And do you think she’s ready to go?

She thinks she is, and I think she probably is as well.

Read more about the 2014 London Marathon and watch a video of the event on the UK edition of ehospice.