Making a statement on palliative care 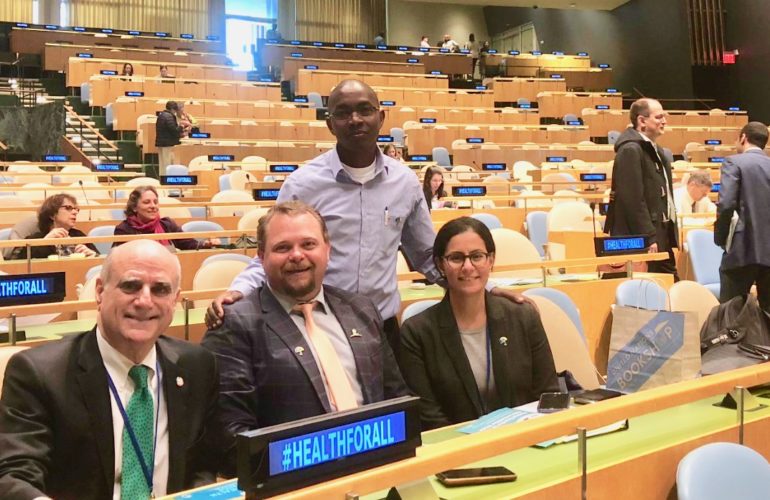 On April 29th, the UN hosted a hearing in New York as part of the preparatory process for the UN General Assembly high-level meeting on universal health coverage on 23 September 2019.

From the palliative care community, the WHPCA, IAHPC, ICPCN, APCA and KEHPCA were represented – bringing with them prepared statements on why Universal Health Coverage should not neglect those with the highest health needs, specifically those needing palliative care services.

Inclusivity was a core focus of the hearings in its call for collaborative input into priority asks for UHC.  The audience included over 600 members spanning representation from Member States, observers of the General Assembly, parliamentarians, representatives of local government, relevant United Nations entities, non-governmental organizations in consultative status with the Economic and Social Council and invited civil society organisations.

Even so, there was a clear gap in the inclusivity of voices invited to provide public statements. Specifically, the voices of the elderly, persons in pain and individuals at the end of life, representing over 61 million individuals globally.

While four statements on palliative care were submitted for the three different sessions, none were chosen to be given during the meetings. All the statements will eventually be posted on-line as part of the record of the meeting at: https://www.un.org/pga/73/event/universal-health-coverage/

Ehospice is publishing the public statements submitted for presentation at the multi stakeholder hearings, which can be reviewed on the WHPCA website.

Moving forward, we plan to collectively ensure that palliative care is prioritised as a crucial part of the spectrum of care under UHC that effects everyone and is fundamental for a strong health system. These meetings show that there is much work for us all to do.