Outside of the box: Drugs policy debate in the Americas 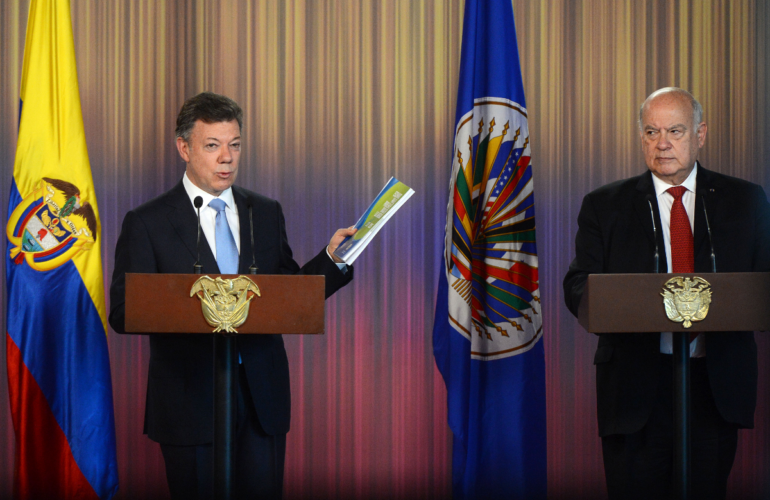 Drug policies can act as a barrier to pain control, and therefore palliative care provision, as an unintended consequence of attempts to control harmful and addictive substances.

The Organization of American States (OAS), which brings together the 35 independent states of the Americas, commissioned the report to provide an evidence-base to inform national policies on drug control.

The Secretary General of the OAS, José Miguel Insulza, delivered the report to the President of Colombia, Juan Manuel Santos, during a ceremony in Bogota earlier this month. President Santos was host of the Sixth Summit of the Americas in 2012, in which the Heads of State and Government of the Americas commissioned the OAS to prepare the document.

President Santos said: “We are very pleased, because the quality of the Report is truly exceptional. This was what we wanted, empirical evidence without prejudice, and now the real work begins, which is the discussion at the political level.

“Let it be clear that no one here is defending any position, neither legalization, nor regulation, nor war at any cost. What we have to do is use serious and well-considered studies like the one the OAS has presented us with today to seek better solutions. I have no doubt that we all share a common destiny, here we sometimes differ is in how we reach it, and this report will help us to come to agreement, it will be the basis for a long postponed discussion.”

The report is in two parts; the analytical report looks at concerns drug consumption and attempts to control the effects of drugs on human health and the scenarios report describes number of possibles futures, outlining the possible outcomes of taking certain actions, or not action.

Secretary General Insulza explained that: “Three of the four scenarios … describe different future alternatives, depending on whether the focus is largely on institution building, experimentation with legal changes, or the community’s capacity to respond to the problem. The fourth … alerts us to what could happen if we are incapable in the short run of reaching a shared vision that allows us to join forces to address the problem, while respecting diversity in our approaches to it.”

The purpose of the report is to provide an evidence-base to inform national policies on drug control, therefore palliative care advocates should critically engage with this publication.