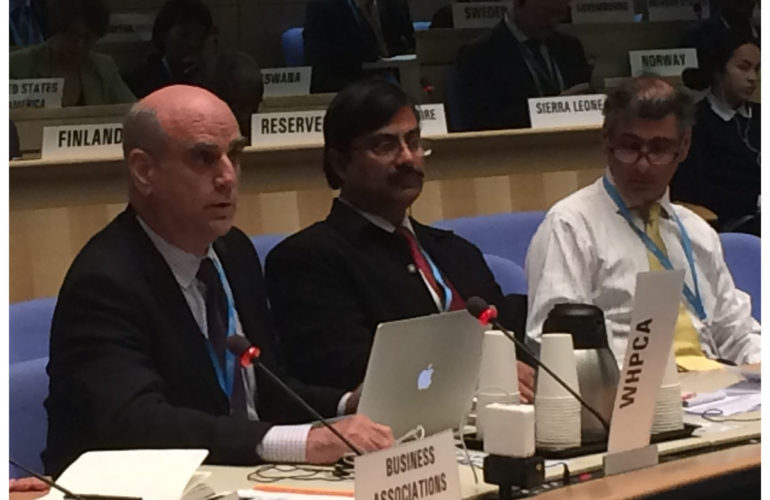 The Dialogue was the first global meeting convened by the WHO on NCDs following the United Nations General Assembly Summit for the Adoption of the Post-2015 development Agenda, held in New York from 25-27 September 2015.

It provided an opportunity to explore how to countries can fulfil their NCD commitments in the context of the Sustainable Development Goals (SDGs) 2015-2030, which includes a global target to reduce premature mortality from NCDs by one third by 2030.

Palliative care advocates, Dr Stephen Connor (Worldwide Hospice Palliative Care Alliance) and Dr Katherine Pettus (International Association for Hospice and Palliative Care), attended the Dialogue and gave verbal interventions on the importance of palliative care in the response to NCDs, addressing NCDs for older persons, and the need for urgent action to improve access to controlled medications for palliative care for NCDs.

Dr Connor said: “Recent research has emphasised that we all are aging at different rates. Some age faster than others. Many live into older age in good health. Non-communicable disease is principally experienced by older persons, many – perhaps most – over the age of 70 years. While many with NCDs in Low and Middle Income Countries are younger, people needing palliative care tend to be older individuals; not just at the end of life but often for one or more years prior to death.

“It is critical that we address the needs of all with NCDs no matter their age. The focus on prevention of premature mortality from NCDs is critical. However, we risk minimising the need for care and support for those affected by NCDs by defining premature mortality as only those under 70 years of age. Many people over 70 would consider their NCD to be premature.”

Dr Pettus added to this, emphasising the importance of access to controlled medications for NCDs and suggesting that collaboration between UN agencies is critical in addressing this problem.

Dr Connor suggested that the Global Coordinating Mechanism on the Prevention and Control of NCDs convene UN agencies – including the International Narcotics Control Board (INCB), United Nations Office on drugs and Crime (UNODC), and WHO – to create a mechanism to help member states that are currently underutilising essential medicines, including controlled substances, to more effectively care for those with NCDs.

Read more about the Dialogue and the Global Coordinating Mechanism on the WHO website.