Palliative care for prisoners living with HIV in South Africa 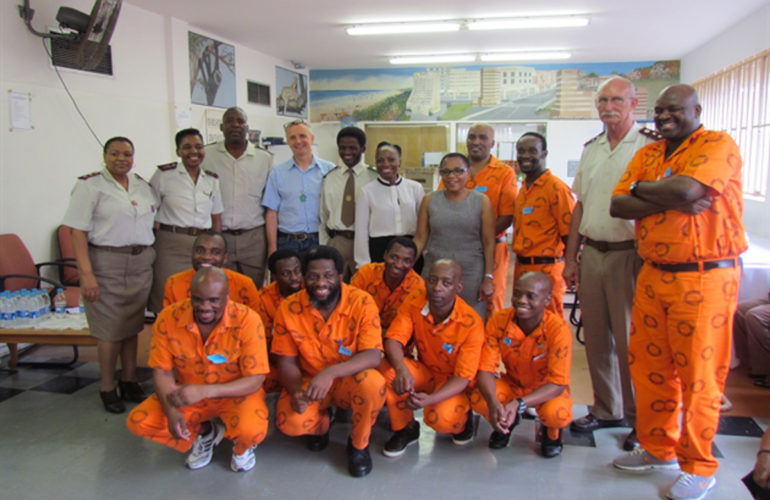 UNAIDS estimates that around 7 million people in South Africa are living with HIV, with a prevalence rate of 19.2% among people between 15 to 49[1].

The United Nations Office of Drugs and Crime (UNODC) recognises that rates of HIV and AIDS in prisons are “significantly higher” than those in the general population[2], pointing towards a severe burden of HIV and AIDS in South African correctional facilities.

According to the South African Department of Correctional Services preliminary Annual Report (2015), 98% of HIV positive inmates were on anti-retroviral treatment (ART). Palliative care is essential in the continuum of care for people on ART, for adherence support, pain and symptom management and social support.

The WHO states that palliative care for HIV can improve outcomes and save costs. Correctional centre offenders and remand detainees have the poorest access to this effective approach.

Palliative care is recognised as part of the human right to health, and HPCA has a vision of promoting palliative care for all whatever the setting.  This vision extends to offenders and remand detainees living with life threatening illness, including HIV and AIDS, as well as cancer, neurodegenerative diseases, or cardiac illness.

Palliative care should be integrated into national health systems as part of universal health coverage and as set out in World Health Assembly resolution 67.19: Strengthening palliative care as a component of comprehensive care throughout the lifecourse.

In support of the South African government, HPCA through its member organisations is equipping health staff and offenders and remand detainees within the Department of Correctional Services to provide palliative care. HPCA facilitates teaching, mentorship and the referral of the offenders on medical parole to hospice for home based care.

The possibility of dying in a correctional centre adds to the existing stressors for offenders and remand detainees who quite often are already suffering loss, guilt, shame and remorse as result of imprisonment (Dawes, 2002).

There is a developing concern for prisoners diagnosed with a life-limiting illness dying in correctional custody. A documentary aired on national television in 2008, illustrated the challenges of offenders and remand detainees caring for a dying person.

This compelled HPCA to enter into discussions with the Department of Correctional Services (DCS) on integrating palliative care into the health care system of the DCS, whose system is aligned to the South African government’s primary healthcare system.

The DCS/HPCA Pilot Project in the Kwa-Zulu Natal province in 2009 pre-empted a Memorandum of Understanding (MOU) between the National Department of Correctional Services (DCS) and HPCA.

The programme relies heavily on teamwork among correctional staff and inmate volunteers, which depends on and also generates trust and mutual respect.

On 22 October 2009 HPCA and DCS signed a service level agreement (SLA). The two organisations decided that a provincial partnership be piloted first. After the successful pilot in Kwa-Zulu Natal province, the project was rolled out across the country.

The programme utilises local hospice resources to train correctional centre staff members and inmate volunteers to work together in an interdisciplinary effort to provide palliative care to offenders and remand detainees living with and dying from HIV and other conditions.

The programme follows the US model[3] where well-trained inmate volunteers assist nursing staff with palliative care. This in turn can have a positive impact on rehabilitation as it gives opportunity for skill development, as well as care and support.

The HPCA Guidelines for Palliative Care in Correctional Settings followed from the successful implementation of the pilot palliative care project.

These were developed by a task team comprising health care professionals from DCS and HPCA, and based on the National Hospice and Palliative Care Organisation (NHPCO), in United States of America publication: ‘Quality Guidelines for End-of-Life Care in Correctional Settings’ (NHPCO, 2008).

The Guidelines were a significant development and remain a valuable guide to be used by all members of the Interdisciplinary team in DCS.

Initially, HPCA members facilitated four palliative care training courses, with the objective to transfer the knowledge to DCS staff to take forward in the national roll out of the programme. Mentorship for staff and volunteer offenders caring for fellow offenders was ongoing throughout the project.

The programme was assessed using the APCA POS scale for patient-reported outcomes.

Despite challenges relating to security and operational issues and legal, medical and philosophical barriers, the project also had many successes. These included: training and educating of staff and inmate volunteers, development of guidelines and resources, and the building of relationships between local hospices and correctional facilities.

Although much progress has been made since the initiation of the project, the sustainability of the project depends on commitment and partnerships. Teams working together on securing living wills, advanced directives, letter writing, burial guidelines, and managing hospice inmate volunteer support are of importance to take this project to a next level.

It is envisaged that this programme will bring about realistic and sustainable change in South Africa’s care for offenders and remand detainees in need of palliative care for HIV and other illnesses.

This initiative marks South African Correctional Services as an innovative leader in the largely unexplored field of palliative care in prisons on the African continent.