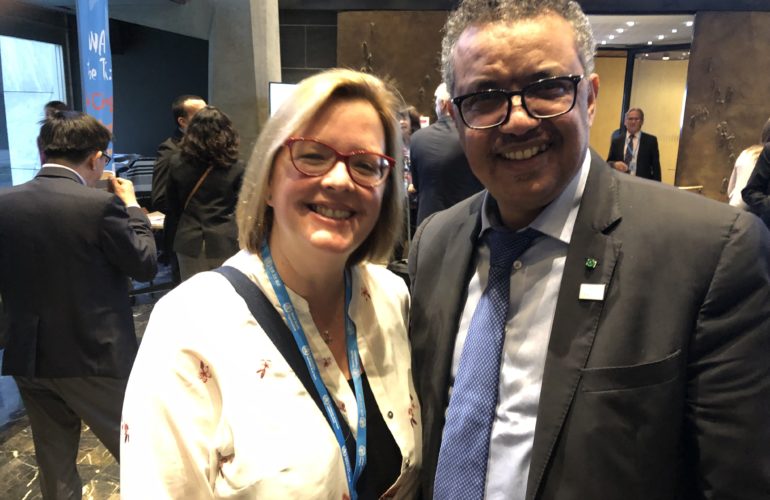 The voices of people affected by palliative care, and those of community palliative care assistants, brought advocacy to life at the 144th meeting of the World Health Assembly Executive Board in Geneva last week.

The Worldwide Hospice Palliative Care Alliance spoke on the importance of including palliative care in the upcoming UN High Level Meeting on universal health coverage (UHC), and requested, on behalf of their members, that WHO add World Hospice and Palliative Care Day to the list of world health days.

The International Association for Hospice and Palliative Care (IAHPC) gave effective interventions on the WHO budget, access to medicines, and cancer medicines.

She said: “In our country, there are lots of people who need palliative care to improve the quality of their life. If we could let people understand the importance of this care, then it would be easier for us to establish this care throughout Bangladesh.

“Our government can play an important role by building awareness and providing district-based training to healthcare workers on palliative care.

“The community feels that (our project) Compassionate Korail is a part of them. Since this has been built-up by funds from abroad, I feel insecure what will happen once the funds stop coming. What will happen to the community of Korail and also to my job?”

Importance of palliative care for children

Ms Sharon Thompson, the mother of a baby who died as the result of a rare disorder, shared what it meant to her family that they could  access palliative care. She also noted the need for access to opioid medications to relieve children’s pain.

Speaking during the Executive Board meeting, Sharon spoke about her experiences with her daughter, Victoria, who was born in 2011 with a disease that left her without nerve insulation. This disease left Victoria suffering unremitting and extreme pain.

“Despite being surrounded in care for Victoria’s birth, when we found out Victoria would die, we had to fight for the medical support she needed,” she said.

“We were sent home, but there were no palliative care nurses. We lacked confidence and we lacked equipment. But, we fought for palliative care and Victoria got it. She had symptom management and a safe death at 9 months old.”

“Because of the palliative care Victoria received I can talk to you now, work, support other mothers like me and live well. Our family do not have to grapple with the memories of Victoria living and dying in pain. We have no regrets.”

Sharon also thanked the WHO for including palliative care in the draft WHO Impact Framework for the 13th General Programme of Work, and asked that they ensure their budgets included palliative care for all, including children, as part of universal health coverage.

During a later session, which Sharon was unfortunately unable to attend, her impassioned intervention was read out on her behalf. In this she described how the use of opioid medications, particularly morphine, provided the necessary relief from pain and suffering for Victoria and allowed the family to make “beautiful memories with her” and allowed her to “die safely and without pain.”

Referring to the ‘hidden suffering’ of over 61 million adults, children and their families, her intervention ended: “I respectfully request that when you make policies and plans and set budgets on access to medicines, that you think of Victoria and children like her around the world, who are in desperate pain which could be treated.”

“I ask you to look carefully at the relatively low costs of providing access to pain medications for those who need them against the huge and long-lasting human costs of not providing them. In memory of Victoria please use your power and influence to stop this global, avoidable suffering.”

Dr Tedros, Director General of the WHO, continued to show his support for palliative care. He had the opportunity to meet and speak with Sharon, and reached out to Lucy Watts, MBE, a UK-based palliative care advocate with direct experience, to renew his commitment to palliative care as part of UHC.

At the end of the session on access to medicines, the Acting Director General for Medicines, Mariangela Simao, expressed her thanks for the opportunity to listen to the voice of ‘real people’ at the Executive Board, saying: “It really does make a difference.”