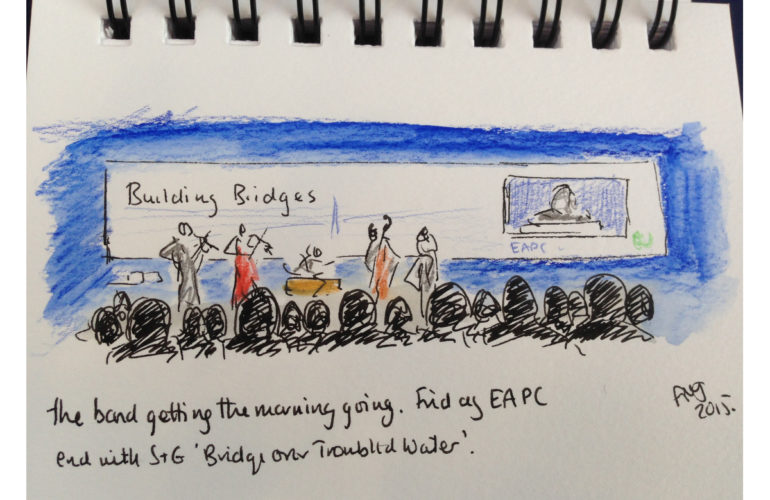 More than 1200 abstracts were submitted to the scientific committee. Excellent presentations and a plethora of posters provided the delegates with a wealth of new knowledge and information.

One stand in the exhibition hall was designated a ‘Danish corner’ where people were invited to meet the Danish hospice and palliative care professionals and find out more about the specialty in the host country.

The Crown Princess Mary of Denmark, as patron of the Congress, joined delegates in the Bella centre to hear the opening plenaries.

Professor Per Sjøgren, Chair of the Conference organising committee, addressed the audience, noting that palliative care is complex and challenging but essential in healthcare today.

He recalled the theme of the conference, ‘Building bridges’, and noted that this can be between professionals and non-professionals, continents and countries, and the different disciplines within palliative care as well as outside of the field.

He added that the metaphor of building bridges also suggested the connections that delegates would make at the conference, to: “new people, new ideas and new knowledge.”

Prof Sjøgren reminded those listening that the EAPC continues to strive for better quality and more access to palliative care for more people in more countries.

Dr Agis Tsouros, director of the World Health Oragnization European Division of Policy and Governance in Health and Wellbeing, spoke about the importance of palliative care, particularly from the perspective of the WHO.

He commended the whole-person approach of palliative care, saying: “I cannot think of a better example of an aspect of care than palliative care that resonates with our 21st century idea of health and wellbeing. Health is a whole-of-government and whole-of-society responsibility. ”

Dr Tsouros drew attention to the inequities present in health care in general, and palliative care specifically, noting that inequities for children are even more severe.

He said: “We should see access to palliative care as a marker of a well-functioning health system and a society that values dignity and human rights.”

He discussed the goal of integration of palliative care into national health systems, saying: “We cannot do this alone. We need NGOs, we need our WHO collaborating centres. We need to count on all of you, the professionals who can bring not only the knowledge, but also the passion for bring palliative care to those who need it.”

Dr Tsouros reminded the audience about the publications and tools published by WHO to help educate medical professionals, the public and policy makers about palliative care. These include:

He quoted Dame Cicely Saunders, saying: “How people die remains in the memory of those who live on.” He closed by saying: “I believe this is our time to make palliative care a truly integral part of our (health) services throughout the world.

“We have a great chance if we work together to make this difference. “

She commended the EAPC for being a “vibrant, energetic organisation that has professionalised the field (of palliative care).”

Dr Foley expressed her admiration for the EAPC who, as she saw it, continue to challenge governments and policy makers in all of Europe, both East and West, to implement the WHA resolution and make palliative care available to all those who need it.

She gave special thanks to Mary Callaway, founding associate director of the IPCI, and to the national foundations who, at the local level, have created and fostered the development of palliative care in Central and Eastern Europe.

Professor Luc Deliens, Professor of Public Health and Palliative Care and Chair of the End of Life Care Research Group Vrije Universiteit Brussel & Ghent University, gave the opening plenary, entitled: ‘Building bridges: to where and what next in the world.”

He emphasised that communication and collaboration are extremely important within palliative care, and asked: “Have we built enough solid bridges through the health care system as well as society in general?”

He said that if people working in palliative care want to build bridges to more people in government, and more policy makers, a public health approach is essential alongside clinical services.

In the afternoon plenary, Professor Charles Normand gave an interesting perspective on costing palliative care. He spoke about palliative care in the context of austerity and argued that we should think less about cost effectiveness and more about value.

He made health economics, a very complex topic, extremely accessible and encouraged those listening to be engage with this important discipline.

Follow coverage of the 14th World Congress of the EAPC on ehospice or using the Twitter hashtag #EAPC2015.