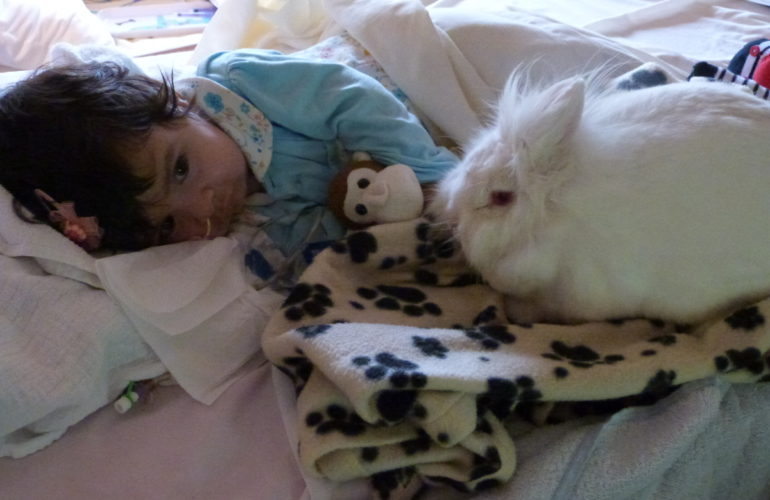 “It took many meetings,” laughed Sheila O’Leary, the director of clinical care at Martin House, “many, many meetings.”

The Japanese film crew working for the production company, Slow Hand, had approached the hospice several months prior to their intended filming date with a plan to show the documentary on the channel, NHK – Japan’s national broadcaster.

And despite Sheila and her team recognising the process would require a great deal of sensitivity towards the patients and their families, she hadn’t realised quite how intense the project would be.

So how did the hospice go about managing a situation which had the potential to take advantage of people in such a vulnerable situation?

“Consents were signed by everybody,” said Sheila. “But anyone was able to opt out or in during the process.”

The six-man crew also had restricted access to some areas, they were not allowed into the nursing handover and were unable to get details of a child’s diagnosis without the parent’s consent.

And rules were put in place so that the hospice or parents could review the film at any time and had the right to edit.

On one occasion, they had to ask the film crew to stop, as staff at Martin House felt that boundaries had been crossed. Sheila to be assertive with the Japanese visitors and simply say no when she needed to.

But despite these challenges, Sheila said she was keen to promote the work of Martin House and said that the hospice has always prided itself on being open to learning and sharing.

‘The life of the child’

Sheila also found the TV channel’s approach refreshing. The documentary took a sociological point of view, looking at how children and families live in adversity, rather than focusing solely on the heath of the child.

“The hospice does this everyday”, said Sheila, “we focus on the life of the child, we’re not focusing on their death.”

“The value of living with a disability and need to make memories” are all explored in a hospice environment, according to Sheila, and the team at Martin House were keen to capture and share that with the international audience.

Sheila recalls a moment where the children and the staff were having race down the corridor with the presenter of the documentary. “It was great to capture normal activities,” she said.

The situation in Japan is very different for children with life-limiting or life-threatening conditions.

The television crew were also fascinated by the fundraising element to the hospice, as this is something not commonly seen in Japan.

And Hana Kuyama confirms this: “Japan doesn’t have much charity, the hospices don’t have funding. In the UK charities are lucky, people will give money to help and support.”

Trained as a production and licensing manager, the Japanese native worked as a translator during the documentary planning and filming.

Hana told ehospice that in the Japanese culture, you look after your children and your family at home and this is why hospices are less common, “we wanted to tell people in our country that children’s hospices are a good idea,” she said.

“It is very, very hard to come across funding in Japan,” she continued.

Hana describes the experience as “incredible” and “completely life changing,” and many of her preconceptions of a hospice were challenged:

“Before I started I thought it would be place where people die, but I realised it is a totally different environment.”

And how did the television crew deal with the restrictions put in place to protect the patients?

“It is always a dilemma for television production crews. We are aware of the intimate, private moments, but we have to film them, that’s what we do.”

Hana made a rule with herself not to cry, “but I just couldn’t help it,” she said. “All of the crew have children, so it was difficult for us to see the children and families going through it. But we wanted to promote the children’s hospice movement and raise awareness in Japan,” she continued.

And Sheila agrees that the time spent filming with the crew was beneficial :

“Palliative care should be available to every child. We shouldn’t retain knowledge and skills in the UK. We can learn from other countries, but we should also be sharing our skills and experiences.”

Since the documentary has been aired, the hospice has received several donations from Japanese supporters, but more importantly for Sheila, she hopes the documentary “will help people to think.”

The documentary was called “Tabi no Chikara” translated as Potential of the Journey, or Journey that gives us energy. It was originally broadcast 19 June 2013 on channel NHK in Japan.

You can find out more about Martin House Children’s Hospice on their website.