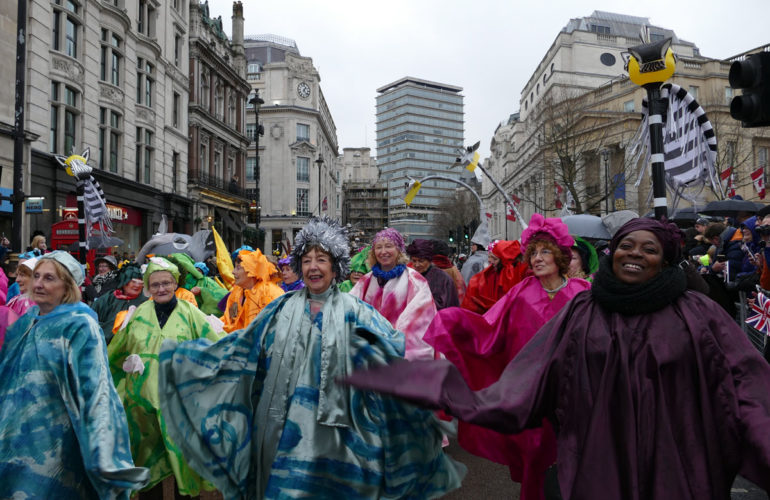 St Christopher’s was the only hospice at the parade and the occasion was especially memorable because members of the hospice’s Young Adults Group made a very special journey to central London to take part in the event.

During its first appearance at the capital’s popular parade, the hospice managed to scoop second prize (out of the 17 London Boroughs who entered floats for the parade) for its ‘Pegasus and the Circle of Life’ design that it created to represent the Borough of Lambeth, earning the charity £9,000.

The hospice’s second float, which represented the Borough of Bromley with the theme ‘Screen Stars & Hospice Heroes’, won ninth prize, earning an additional £2,000 for the hospice.

St Christopher’s two floats represented the Boroughs of Bromley and Lambeth as they are two of the five London Boroughs where St Christopher’s supports patients and their families and carers at the end of life.

Both the parade floats, the puppets and costumes were lovingly created by patients, staff, supporters and volunteers at the hospice in Sydenham and its Bromley site at Caritas House in Orpington.
Shaun O’Leary, Joint Chief Executive at St Christopher’s said: “Helping to create the floats and taking part in the New Year’s Day parade has just been a fantastic opportunity for everyone at the hospice, and a wonderful way to mark the start of our 50th year.

“The atmosphere on the day was breath-taking, with so many St Christopher’s patients, staff and volunteers and choir members singing and dancing their way through London!”

Phillipa Sellar, Nurse Specialist for St Christopher’s Young Adults Group, added: “What made the day extra special was that everyone in our Young Adults Group contributed something to making or designing the float, for example, personal messages and wishes were painted onto decorative feathers on the float, so that even if many of our patients weren’t up to travelling to the parade, they could see the event on TV and feel special that they’d been part of it.

“It was also wonderful that we enabled three members of our Young Adults Group to travel alongside our floats, with one young man taking the central role of the Lion King! To make this dream possible for some of our Young Adults took a great deal of planning, but it was a major achievement for them and such a fantastic experience.”

St Christopher’s Young Adults Group was established to support young people aged 17-25 living with a life-limiting condition in south east London. Because individuals in the group have very special needs, for the first time the parade organisers allowed two ambulances to wait with the floats before the parade set-off so that the group could be kept well and warm while waiting for the celebrations to begin.