Students in Palliative Care in Kerala 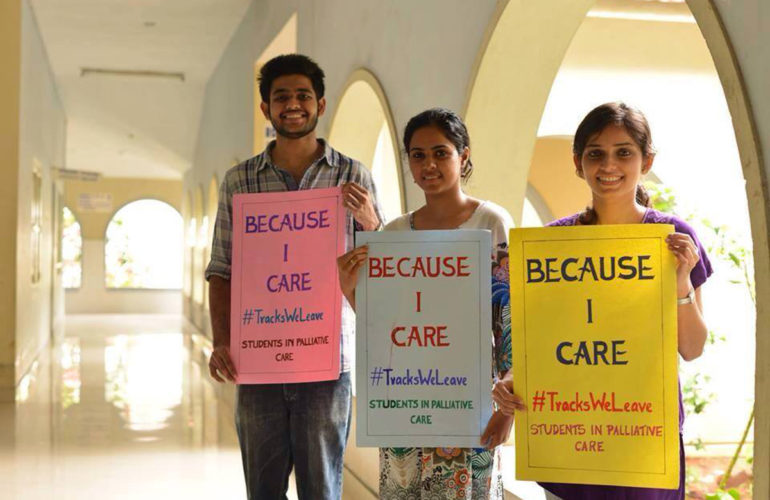 A body comprised of student volunteers whose membership is derived from the various colleges in the city of Calicut, SIPC has contributed in several ways to augment the various patient care and rehabilitation services of IPM apart from their compassionate and positive involvement in the lives of dying and bedridden patients.

Worthy of drawing special attention are the efforts of SIPC to garner resources for managing the 24/7 Home Care Unit of IPM which is now run entirely on the funds raised by the volunteers.

The engagement of the student volunteers of SIPC with the patient rehabilitation programme ‘Footprints’ supplemented the efforts of IPM in delivering the programme and making it useful and productive for the beneficiaries involved. Suffice to say that the participation of SIPC in the ventures of IPM has become indispensable. What once began as a humble venture with a few hundred students has now grown in strength to a force of 4000 plus trained volunteers from around 30 colleges who are actively involved in home care, fund raising and spreading the idea of palliative care among the public.

The success of SIPC has been in tapping the unbridled energy of the youth and steering it towards such a pertinent and timely cause as palliative care.

Trending on its creative interventions with palliative care, SIPC has now chartered itself on the course of a new campaign to generate awareness among the public about palliative care and to increase the resource pool of IPM to enhance its service capacities. Going by the title ‘Because I Care’ the campaign at once draws attention to the twin objectives of palliative care and greater social involvement with the cause. The campaign will be a broad base for the activities of SIPC for the year 2014.

Riding on the success of an earlier fund raising programme: ’10-10’, the student volunteers are now involved in a similar programme: ‘Snehathinte Kaiyyoppu’,  on the platform of ‘Because I Care’, the proceeds from which will go into ‘Tracks We Leave’ – the venture of  IPM to raise money through donations to support patient care.

The sheer number of students who have joined the cause – around 10,000 – is enough credence to the aphorism that ‘palliative care is everybody’s business’.  ‘Before I die’ – a programme convened in the same platform was rather distinctive in its execution, when the student volunteers got together in a busy shopping mall to talk about palliative care.

With more than 300 people turning up for the event and decorating a large white canvas with coloured paper scribbled with the one last wish to realize before they die, the event aroused empathetic responses to the plight of the dying and bedridden patients and effectively managed to get across the idea of palliative care to the people. With more such projects on the anvil, ‘Because I care’ is envisioned to set a milestone in the activities of an exemplary venture like SIPC;  truly reflecting the motto and spirit of the Institute of Palliative Medicine.

Read a beautiful article by Athira Unni, one of the students, on ehospice.