Opinion The impact on palliative care of closing civil society space: the experience of the World Health Assembly - ehospice

The impact on palliative care of closing civil society space: the experience of the World Health Assembly 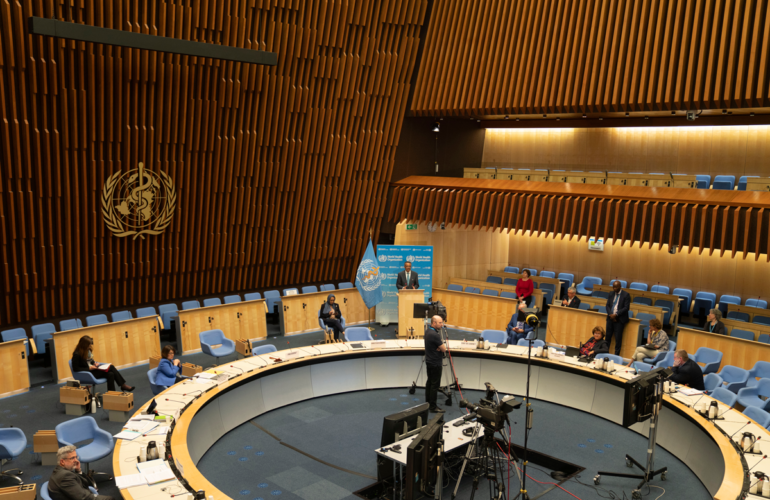 Image: An empty Executive Board Room in WHO Headquarters, Geneva. Credit: WHO/C. Black,

There is deep concern that COVID-19 will provide an opportunity to close civic space for dialogue, adding to long running disquiet on how civil society is included in global and national policy health decision making. My experience of attempting to virtually attend the World Health Assembly has reinforced this worry.

The World Health Assembly is the decision making body of the World Health Organisation  (WHO) which meets annually in May. This year the meeting is virtual and we, as non-state actors in official relations with the WHO, were told we would be able to attend the virtual meeting and submit written statements.

Usually, non-state actors are able to give oral interventions at the World Health Assembly (WHA) but not this time. When we entered the virtual space, we could view the documentation but there was no possibility of dialogue or interaction with delegates. We watched the meeting via public livestream. To be fair on WHO, organising this meeting must have been a mammoth task in the midst of a global pandemic; but there was a sense that civil society was not meaningfully included.

So, what does the potential closing of civic space mean for palliative care? The role of civil society has been instrumental in palliative care development. Civic action on palliative care rose in the UK in the 1960s due to the distress of dying people and a belief that this suffering could be alleviated. Civic action spread globally to highlight and address the experiences of some of the most vulnerable in our societies.

In many countries, the majority of palliative care services are provided by community organisations, or in equal partnership with communities, including caregivers. In the time of the COVID19 pandemic, civil society action is needed now more than ever. The voice and participation of civil society has been vital in developing and driving palliative care with the aim of improving the lives, and indeed dying experiences, of people with serious illness.

Now is a time when the voice of those who need palliative care must be heard. In many settings, we are concerned that palliative care is not being integrated into humanitarian, development and health responses to COVID-19. The reality of the situation on the ground is that over 300,000 people have died from COVID-19, and most of these are older people.

Palliative care is vital for alleviating serious symptoms such as breathlessness, facilitates communications skills, end of life care and bereavement support as well as ensuring continuation of care for those with existing palliative care needs. We are concerned that few people are receiving palliative care, resulting in avoidable serious health-related suffering and distressing deaths.

The consequences of that suffering on family members and ill-equipped and unsupported health care workers is an alarming concern. The lack of voice of civil society at the WHA meant that no-one highlighted the lack of palliative care for people with COVID-19.

The central role and voice of civil society working in palliative care is needed at all levels, arguably now more than ever. Civil society cannot be grateful for being allowed to enter a virtual space with no voice or dialogue. Civil society needs to be meaningfully included in these policy global and national health decision making spaces. If civil society voices are not heard, the most vulnerable in society, including those facing the end of life, will certainly be left behind.