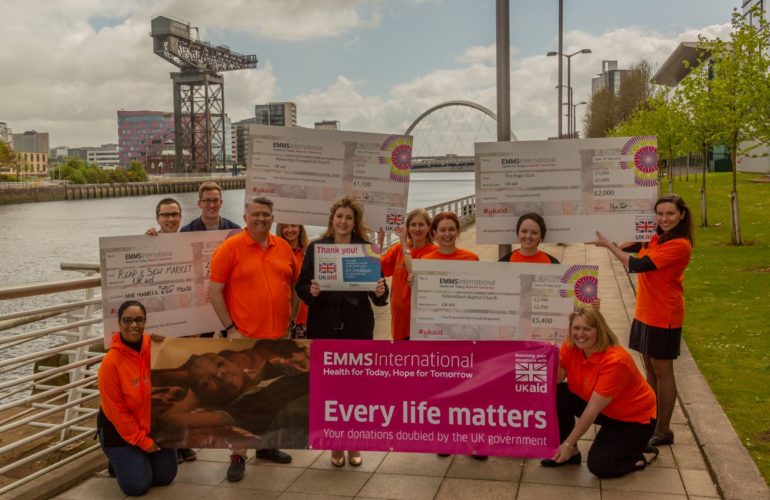 Joined by supporters and fundraisers, they jointly announced that the campaign raised over £1.7 million to improve healthcare for some of the world’s poorest communities, giving improved health and hope of a future free from poverty.

The ‘Every Life Matters’ appeal ran from November 2017 to January 2018 with eligible donations from the UK public being matched, pound for pound, through the UK government UK Aid Match scheme. Donations and match funding will be used to improve care for people overseas with incurable illnesses like cancer.

The campaign focused on the story of Jeremiah, a 14-year-old boy in Malawi with incurable blood cancer. His cancer left him lying on a thin mat in terrible pain and his family’s poverty meant there wasn’t enough food and he didn’t have the pain relief he needed. With the help of EMMS International’s partners in Malawi, he and his family now have the food they need, Jeremiah has a new mattress to relieve his pain and he’s been given a wheelchair so he can go to school with his friends again.

The success of this appeal means more children like Jeremiah, and families across Malawi, will get access to the pain relief, food and specialist care they deserve.

International Development Secretary Penny Mordaunt, said: “EMMS International provides lifesaving healthcare to vulnerable people suffering from incurable illnesses in the most remote areas in Malawi and helps them grow their own food to continue to support their families during the most challenging times of their lives.

“Scotland has had a close relationship with the people of Malawi that goes back for generations and I would like to thank the public for their generosity in helping to raise such a life-changing sum. Every donation made to the Every Life Matters appeal is being matched pound for pound by the UK Government to double the impact of this vital work.”

EMMS International’s CEO, James Wells, commented: “‘Every life matters’ is not just the title of this campaign, but the vision that underpins all of our work. We’re thrilled that so many people share that belief and have helped to raise this amazing amount. With every gift being doubled by the UK government this will help thousands of families in Malawi get access to the healthcare and food they need so that lives aren’t wasted in hunger and pain.”

The Very Rev Dr Lorna Hood, OBE, of the Hope Trust said: “The trustees are happy to support a charity which seeks to bring improvements in healthcare with Christian compassion to some of the world’s poorest communities and with the focus on Malawi which is one of the Church of Scotland’s closest missionary partners.”