Policy WHPCA reports from the first Ministerial Conference on Dementia at the World Health Organization in Geneva. - ehospice

WHPCA reports from the first Ministerial Conference on Dementia at the World Health Organization in Geneva. 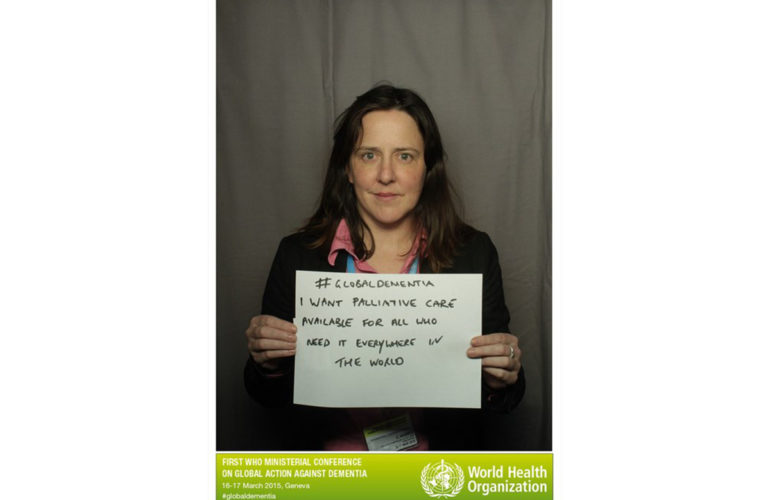 This was co-hosted by the UK government, who have shown significant leadership on this issue since they prioiritised it as part of their G8 presidency in 2013.

The aims of the meeting were to bring together Ministers of Health along with other stakeholders including academics, NGOs and people living with dementia and their carers to look at the progress and way forward in relation to dementia. Over 80 countries were represented.

The evidence presented at the meeting was shocking. It is estimated that 47 million people are living with dementia worldwide, 62% of whom are living in low and middle income countries.

Lack of diagnosis is a critical problem in all parts of the world but it was estimated that 90% of people with dementia in low and middle income countries go undiagnosed.

Evidence of terrible stigma, the restraining of people with dementia, the high prescription of antipsychotics and generally poor quality care was a common theme.

In addition, despite the huge burden and the lack of any cure or effective treatment, there is extremely low funding and attention being directed at dementia.

Information from the National Institute of Health in the US showed research funding on Alzheimer’s Disease at $566million while for cancer it sits at $5,418 million. This is despite the fact that the economic burden of dementia is huge, estimated at $604 billion globally.

So given this context where does palliative care fit in? The WHPCA believes that palliative care is crucial to improve the quality of life of people living with dementia and their caregivers and we issued a statement on the first technical day of the meeting which highlighted our position.

This was drawn from some of the work that has been done in this area, particularly by the European Association of Palliative Care.

There is huge, yet unknown need of the numbers of people living with dementia who require palliative care, yet dementia is a burgeoning issue, or a ‘tidal wave’ as Margaret Chan, Executive Director of the WHO, stated.

In many ways, there were some very positive signs at the meeting that palliative care needs – including at the end of life – of people with dementia are being considered.

This was seen in the preliminary results of a scientific research prioritisation exercise by the WHO which saw ‘quality of life of people living with dementia and their caregivers’ as one of the 7 priorities of the research agenda and, importantly, end of life care and care in the later stages as one of the 10 priority avenues of research.

The Organisation for Economic Co-operation and Development (OECD), a key international player in the response to dementia, has 10 priorities for dementia, one of which is ‘people living with dementia die with dignity in the place of their choosing’.

In addition, countries such as Switzerland and Croatia particularly mentioned palliative care in their interventions and others, such as Saudi Arabia, used very familiar language including ‘adding life to years, as much as years to life’.

In addition, there were strong discussions about caregivers and their needs, as well as the need for coordination between health and social care systems.

However, in the call to action that was formulated and released by member states on the final day of the meeting, there was no specific reference to palliative care or end of life care.

This was disappointing, but it is hoped that there will be a resolution on dementia in 2016 where we can work towards the strong inclusion of palliative care and end of life care for people with dementia.

This is important, not least because the Palliative Care Resolution adopted at the World Health Assembly last year talks of the need for people-centred care for people with non-communicable diseases but does not mention dementia specifically.

So there is much work to be done. While the positivity and energy in the room was tangible, the reality is that there is little idea where funding to move the agenda forward is going to come from.

A 100 million pound initiative, the Dementia Discovery Fund, was announced by the UK government, JP Morgan and key pharmaceuticals, including GlaxoSmithKline, to move forward on the research agenda for treatment but as was regularly reiterated at the meeting we also have to make sure we are focussing on caring for those with dementia now. There must be a good balance between prevention, treatment and care.

Key dates in the future include the UNGASS on the new Sustainable Development Goals in September and the EU presidency of Luxembourg in 2016 where they have committed to dementia being a central focus. In addition, the World Health Assembly in 2016, where it is hoped a dementia resolution will be passed, will be key.

The Worldwide Hospice Palliative Care Alliance is pleased to be a member of the Global Alzheimer’s and Dementia Action Alliance and look forward to working with our colleagues towards the improved quality of life of people living with dementia, and their caregivers.