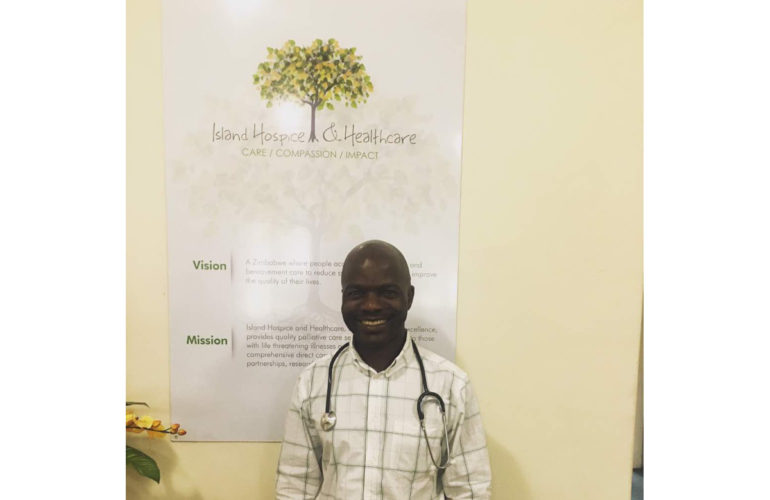 Recent political events in Zimbabwe mean that Island Hospice and Healthcare are needed more than ever. This is especially given the breakdown of the healthcare system and that 1 in 60 need palliative care (WHO, 2004).

Patients are typically first diagnosed when their condition has advanced making it more challenging to deal with their treatments. Most patients are referred for palliative care with a lot of pain and other distressing symptoms such as wounds, vomiting and diarrhoea.

In 2016, the World Bank estimated that Zimbabwe had a population of more than 16.5 million people. The country has only two radiotherapy machines that service the public health system. Inevitably, this places a huge burden to enable access for patients and families who need the radiotherapy, chemotherapy and palliative care services most of which are concentrated in cities far from perhaps, the neediest people for these critical services.

The Minister of Health and Child Care (MOHCC) in Zimbabwe notes that: “currently, over 5000 new cancer cases are diagnosed (all types) in Zimbabwe annually. Experience has, however, shown us that this is just the tip of the iceberg as many cancers are not captured by the routine National Health Information System because the patients do not present for treatment, or some deaths are not registered” (MOHCC National Cancer Prevention and Control Strategy for Zimbabwe 2014-20018). This shows the great need that remains to enable patients, families and communities to achieve a better quality of living as the cancer disease burden increases while service delivery for specific cancer treatment remains static or not available in most parts of the country.

Two case stories of patients that I managed illustrate the vast differences of outcomes when one has resources and the other does not. Both patients have similar diagnosis that is, cancer of the vulva (Ca Vulva) and Human Immune deficiency Virus (HIV) both on Anti Retro Viral (ARV) treatment.

Victoria* was diagnosed with HIV in 2014 and was subsequently commenced on Anti-Retro Viral therapy (ARVs). However, she mentioned that she had an itchy sore on the vulva which started in 2010.

The sore kept growing and in March 2016, tests were done which confirmed that it was cancer of the vulva which had spread to the lungs and liver. Victoria was experiencing a lot of pain; she could not walk and became bedridden. She told her healthcare team that her life was a misery and she even wished she would die. This was viewed as a cry for help. Victoria could not afford the money required to undergo chemotherapy and radiotherapy.

The doctors had rightfully told Victoria that her cancer was stage IV (the final stage of cancer progression where it is very advanced) and that whatever treatment that would be done would be palliative. She was then referred to Island Hospice and Healthcare (Island) for palliative care incorporating pain management, distressing symptoms management, patient and family counselling.

Her pain and other distressing symptoms were controlled successfully. The disease progressed and Victoria developed a vulva wound which kept growing uncontrollably. She started having radiotherapy from one of the government referral hospitals, where she had thirty treatments of radiotherapy. The treatment benefitted Victoria as the wound has begun healing and she is able to walk once again showing all signs of improved quality of life.

Sarah was diagnosed with HIV and started taking ARV medications. According to her, she was fine since 2010 when she started taking the ARVs. In July 2016, Sarah noticed a sore near her female reproductive genitalia and went to the doctor where tests confirmed cancer of the vulva. Several tests were done to ascertain the extent of the cancer to which some abnormalities on her lungs were identified.

However, she could not raise enough money to undergo a special test called Magnetic Resonance Imaging (MRI) scan as was recommended by her doctor before undergoing chemotherapy and radiotherapy. One of her doctors suggested that Island be involved to offer palliative care thus, offering pain and distressing symptoms management, patient and family psychosocial support among other services.

When Sarah was initially assessed by Island’s palliative care nurse, she was in a lot of pain despite the fact that she was already taking some pain medications. During her pain assessment, the nurse observed that she was experiencing a complex pain syndrome (where pain may emanate from the nerves, soft tissue and bones). Sarah’s pain was successfully managed as she explained that the pain had subsided and that she was experiencing a better quality of life.

However, because Sarah could not raise the money required for MRI, she got stuck as the test could not be done. The wound kept growing rapidly. While discussions with patient and family about deteriorating conditions were held and the need to be reviewed by the doctor involved were done, the family failed to raise any money required. To date, her condition has degenerated such that she is now bedridden, unable to talk and eat. She is dying.

A reflection on the two case scenarios

Looking at the above two cases, I am convinced that although chemotherapy and radiotherapy may not totally eradicate advanced cancer disease, it can definitely improve one’s quality of life by shrinking the tumour, thereby leading to the drying up of wounds and as a result reducing pain and suffering.

A radiation oncologist doctor and the cancer registrar Kadzatsa W and Chokunonga E (May 2016) respectively explained that: “Radiotherapy is an important component of any meaningful cancer control program; it saves lives and has notable positive economic benefit.”

It is a painful experience to work with patients and families who, because of financial challenges, fail to access standard care and treatment. While Island endeavours to address pain and other distressing symptoms, financial resources and accessibility expert cancer care remains a huge challenge for families faced with life threatening illnesses.

An integrated approach to managing cancer from prevention, diagnosis, care, treatment and palliation must be adopted and embraced by all healthcare professionals. It is against this background that the public health financing must be vibrant so that no one is left behind despite their economic status and their geographical location. Efforts must focus on decentralising cancer care including prevention, diagnosis, treatment, palliative and supportive care.

Island Hospice and Healthcare in the press

Given the huge difference that palliative cancer treatment can make to the quality of life of patients and families, Island Hospice and Healthcare have done a lot of advocacy work to raise awareness of this critical issue.

Below are a number of articles in the Zimbabwean media, drawing national attention to the need for quality palliative care, including palliative cancer treatment for all Zimbabweans.

*names altered to protect the identity of the patients.