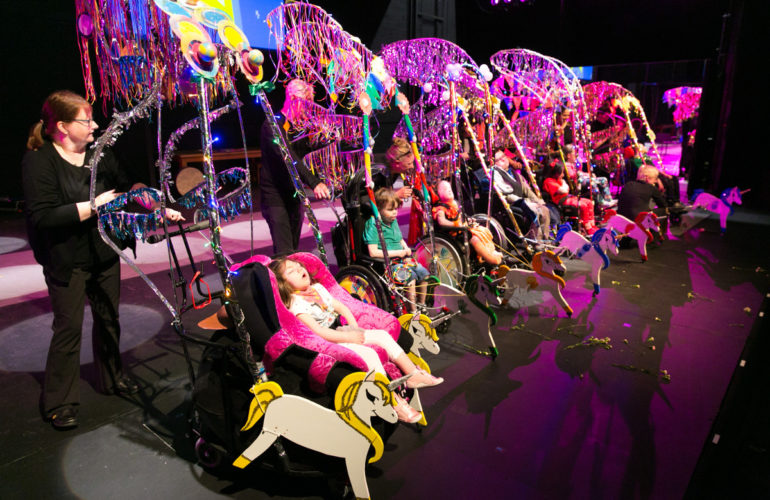 LauraLynn, Ireland’s only children’s hospice, is hosting of number of exciting events this week to mark National Children’s Hospice Week.

As Ireland’s only children’s hospice, LauraLynn is in a unique position to support many families and children with life limiting conditions across Ireland.

Running until this Sunday 10 June, families of LauraLynn will have a number of opportunities to create special memories, celebrate and have fun with their child, which they may not usually have the opportunity to do without specialist support.

Launching the 2018 Children’s Hospice Week, LauraLynn held a full wheelchair-focused stage production at the Abbey Theatre. A live performance of ‘The Much More Magnificent Seven’, written by Paul Timoney, was held in conjunction with the Abbey Theatre, Kids Classics and the National Gallery of Ireland and allowed the seven children who took part to experience a professional theatre production for the first time in their lives.

A number of fundraising drives will take place across Children’s Hospice Week, alongside a number of family events which will celebrate the children and families of LauraLynn. Some of the events include a children’s bake-off, flower and pottery arranging, singing workshop, art workshops for families as well as a puppet making class with Bosco! LauraLynn have also teamed up with a number of specialists to provide complimentary therapies to parents such a massages, skin treatments, hair styling and more, allowing them the opportunity to relax and unwind, safe in the knowledge their child is receiving exceptional care from LauraLynn.

National Children’s Hospice Week will culminate in a live telethon with TV3’s Ireland AM on Friday 8th June, where we will ask the nation to tune in and come together to donate funds and help LauraLynn reach their fundraising target.  This year alone LauraLynn requires €5 million to maintain services, of which €4.2 million must be raised through fundraising efforts.

Since opening in September 2011, LauraLynn Ireland Children’s Hospice has provided specialised hospice care to more than 325 children with life-limiting conditions and their families. LauraLynn provides holistic care to each child which enables them to make the most of every day. This care also extends to the family of each patient who are often dealing with difficult emotional, physical and financial pressure. For more information, click here