Life after Loss – One Man’s Story 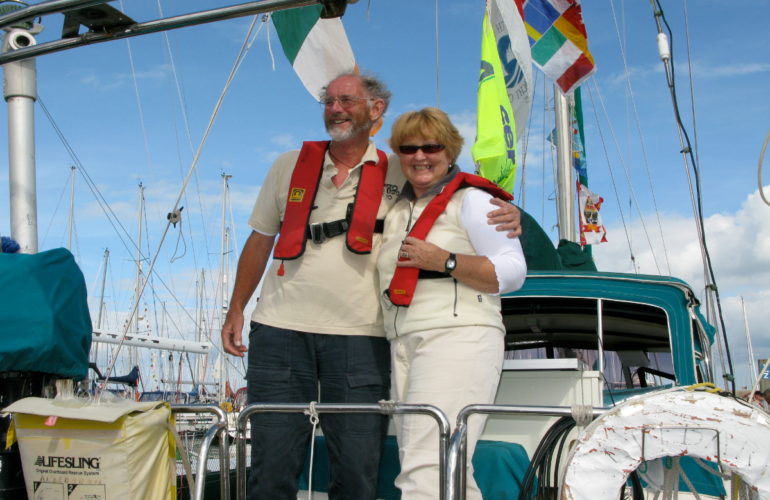 Following the death of his beloved wife of 48 and a half years, Pat was struggling.

‘We had an absolutely amazing life together, but after she died I was in a very, very dark hole,” he says. “If I had believed that there was a life after this, that I’d meet Olivia in the next life, I’d have killed myself. That’s how bad I was.’

Pat and Olivia met at a dance on Harcourt Street in Dublin in the 1960s. “I met this lady and we fell in love as soon as we met. The rest is history,” Pat says. “I was 21 and Olivia was 20. I went home to the bedsit I was sharing with another chap, and I woke him up and said ‘I’m after meeting the girl I want to marry.”

They made Clontarf their home with Pat setting up his own marine business there overlooking the bay. Many happy years passed with their children, then grandchildren with lots of time spent sailing, travelling, dancing and more.

‘There is a lot of cancer in both sides of the family…. so we had this cancer thing hanging over us. I said to Olivia one day, “I think before we get hit with cancer, we should do something, I think I would like us to sail around the world.”

With the boys grown up, there was nothing stopping them. Despite the planned four year excursion, they ultimately spent nine years abroad, visiting exotic locations like the Galapagos Islands, Sri Lanka and as far as New Zealand.

They spent days on the boat, fishing for dinner, listening to Luke Kelly, and diving when the boat was anchored. Pat now regularly gives talks to the public about their global adventure.

In the spring of 2015, a number of years after returning to Ireland, Olivia began to feel unwell. After an initial course of antibiotics had no effect, they were referred for further investigation and ultimately lymphoma was diagnosed. To begin with the prognosis was hopeful and Olivia began chemotherapy. However, she gradually went downhill and died at home that August.

Following Olivia’s death, Pat got one-to-one counselling and then attended a bereavement support group, organised by the Irish Hospice Foundation and Target. He went up one morning a week for six weeks and found that listening to and helping other people was very beneficial.

‘I still find it very hard to go up to her grave. On our 50th wedding anniversary, I cried for hours. Seeing all those sad stories on the headstones, it does remind you that we’re only here for a short time.’

Now, Pat is learning to live with the loss of Olivia while embracing life once more. The loss never fully disappears but Pat is learning to integrate it into his life. He is active on a number of committees and is also dating again. He met Geraldine after registering on a website that connects people over the age of 50.

“Geraldine can talk about the husband she lost, and I can talk about Olivia, and that’s all very open. Having someone makes a huge difference; it’s made me start to plan again.”

If you are bereaved, the Irish Hospice Foundation has a number of resources and tools, which you may find useful, visit www.bereaved.ie