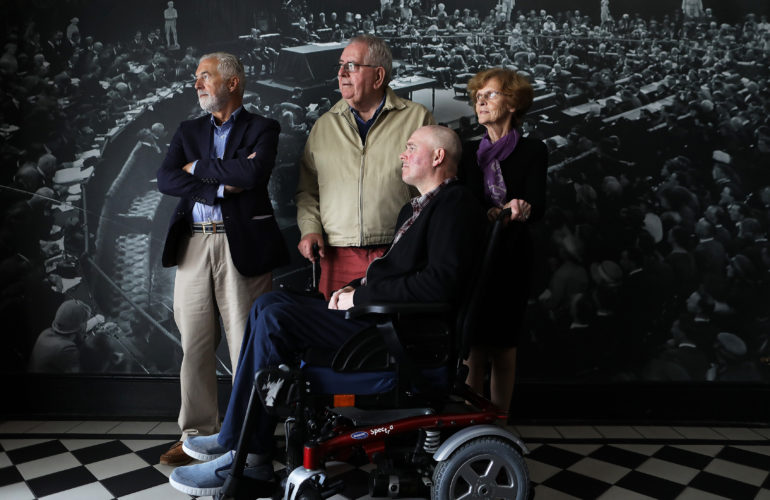 Pictured are some of those featured in the new Palliative Care Week video campaign l-r: Donal Crowley, Billy Coleman, Cork; Billy Reilly from Raheny Hospice with Helen Bell who’s husband Donal passed away on the 11th May at the All Ireland Institute of Hospice and Palliative Care(AIIHPC) launch of Palliative Care Week at Dublin’s Mansion House earlier this week. Photograph by: Julien Behal

The National Palliative Care Week campaign, running until tomorrow (15 September), also coincides with the launch of series of personal video stories of people who have benefitted from palliative care.

62 year-old Donal Crowley from Cork, who is living with Stage 4 neuroendocrine cancer, is one of those featured in the videos by the All Ireland Institute of Hospice and Palliative Care (AIIHPC).

Donal fell ill on the 3rd July 2015 and was diagnosed 4 days later with stage 4 Neuroendocrine Cancer, consisting of numerous tumours in the liver and stomach area. While his prognosis at the beginning was relatively positive, this soon turned to a far more serious situation.

Donal began his treatment with Chemotherapy in September of 2015, which had a negative effect. This was followed in November 2015 by a lifesaving operation to remove a 20cm tumour from his liver. In February 2016, Donal had more surgery to remove 10 tumours from his abdominal area. This was followed by a series of treatments with various drugs to control the cancer and its side effects.

During 2017, Donal had three surgical embolisations on a new tumour in his liver followed in 2018 with five sessions of targeted radiotherapy on this tumour. Donal is due back for a scan and consultation in early October 2018 to see the results of this radiotherapy.

Throughout this period, Donal has been hospitalised on numerous occasions for various problems and side effects. His cancer is still active and he is still on medication but the battle goes on.

Marymount Hospice got involved with Donal in the very early stage of his diagnosis at a time when he was a physical and emotional wreck.

Prior to Donal’s illness, he was always a very strong, positive and optimistic person whose glass was always half full, but the onset of his cancer kidnapped him emotionally in a way he would not have predicted.  Most people and their families don’t have the “tools” to cope with a sudden catastrophe such as a cancer diagnosis but thankfully there is expertise and help out there and Marymount Hospice and staff helped Donal at a critical stage of his illness and are still helping him today.

Mr Crowley said: “My prognosis at the beginning was very good but that changed pretty quickly to a negative situation, and that’s where the palliative care people were involved. I have had nothing but good experiences since being involved with palliative care. It will give you a better quality of life, but I think it will also extend your life in a better way.”

You can see all the AIIHPC videos here