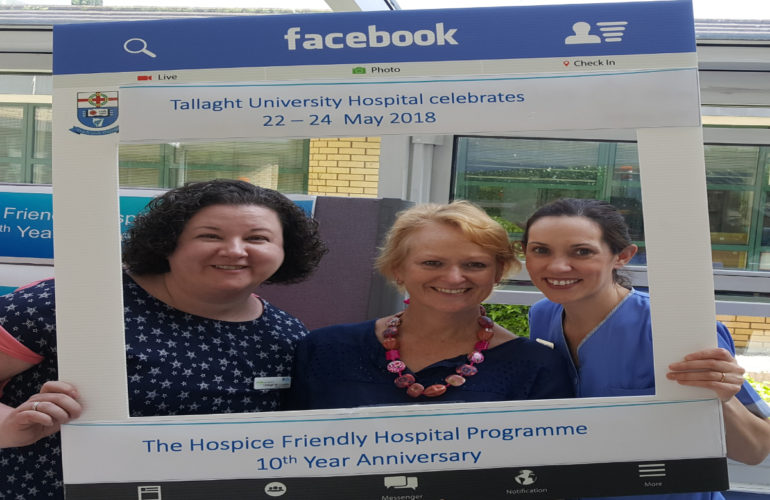 The HFH Programme is an initiative of the Irish Hospice Foundation, in partnership with the Health Service Executive. It was established in 2007 and seeks to ensure that end-of-life, palliative and bereavement care are central to the everyday business of hospitals. 45 public and private hospitals are now linked with HFH including General, Maternity and Children’s hospitals.

Running from 22nd – 24th May, we hosted an information stand with posters featuring the end-of-life resources available, the refurbishments of a number of Family Rooms in the hospital as well as information on the two bespoke calming lamps purchased thanks to our HFH 10th anniversary grant.

‘Grecian Waves’ and ‘Autumn Glow’ from the Chronos Series (Greek word meaning Time) are two stunning handcrafted stained glass and wood lamps created by artist Cliona Baker for use in end-of-life care in the Hospital. These lamps feature a colour changing led lighting display that promotes a calming, relaxed and peaceful atmosphere for patients and family members within a room.

To go along with our information stand, we were delighted to host the ‘Memories in the Making’ hessian art display, kindly donated by the IHF. Memories in the Making is an impactful art exhibition, articulating personal memories and sharing reflections of loved ones who have died.

The concept was captured by artist Aideen Gough, who worked with the IHF on the project.  The idea really captured the public’s imagination with the IHF receiving 198 pieces of cloth, from individuals throughout Ireland, each with their own unique story.

Here in Tallaght Hospital, the display also had a similar effect; it captured the imagination of everyone who passed and encouraged them to express their own personal story.

Overall, our HFH celebrations were very successful.  It really helped with raising awareness of the work being done at the end of life in the hospital and how much further progress has been made through HFH.

For more information about the HFH programme, click here.