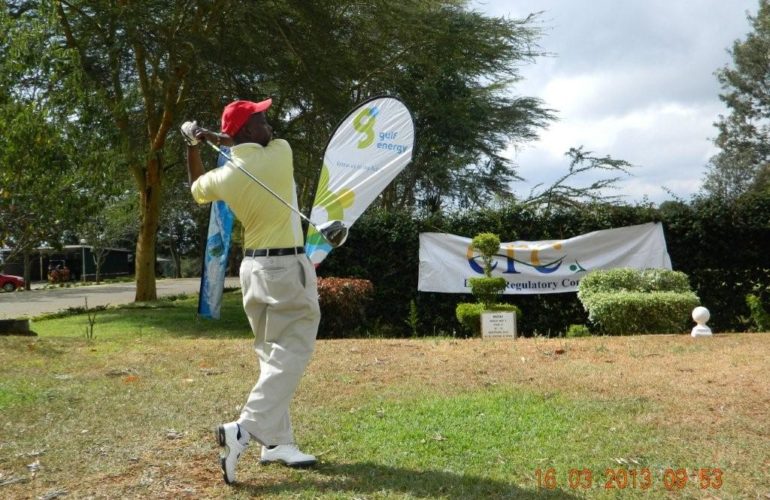 Nyeri Hospice held its annual charity golf tournament on the 16th of March 2013 to sensitize the community about palliative care services as well as raise funds for its activities.

The organization that takes care of cancer and terminally ill patients in Mt. Kenya region saw an increase in the number of companies taking part in the charitable event.

Gulf Energy Limited, Energy Regulatory Commission, Sunflower tent and décor as well as Sanovi Aventis Company were the new entrants in this year’s event, a move that was highly appreciated by Mr. Tarsem Sembhi the chairman of the hospice; as he continually thanked those that had been participating.

“It is with great pleasure that we welcome the four new sponsors.’ Mr. Sembhi said during a dinner event held at the golf club.

The Energy Regulatory Commission through its chairman Engineer Kaburu Mwirichia said that it was impressed by the work the hospice is doing with its limited resources.

Presenting their contribution, the Insurance Regulatory spokes person Mr. George Ngugi said the authority is proud to be associated with Nyeri hospice.

“We identified Nyeri hospice because of their need in delivering palliative care services and we have doubled our contribution with hopes of giving even more due to the increased cost of living.” He said.

Mr. Njogu, a representative of Gulf energy limited Chief Executive Officer said that they were honoured with the opportunity to take part in the event.

The silver sponsor challenged other sponsors of the event to pull more than the average 1.2 million raised annually from the event.

“We understand the need for the care that they give care and we are committed to supporting the community through contribution to such a worthy cause,” added Sandra Gikundi, the Marketing and Communications Manager.

Speaking on the future of the hospice, Mr. Sembhi said that the hospice has acquired a piece of land where they intend to start a home for the elderly.

“The idea is to have this as a commercial venture so that we won’t have to do a lot of fundraising. We hope that this will be self sustaining.” He said.

Although there are still challenges, the chairman was grateful that their care load has been reduced following the opening of Nyahururu and Murang’a hospices.

Mr. Sembhi thanked all organizations that have been supporting all fundraisings and the institution as a whole.

Mr. Ritho, one of the hospice social workers said that the day was impressive due to the great turn out, compared to previous years.

Baldev Singh a member of Nyeri golf club, and a volunteer organizer for the charity golf event since its inception was pleased with the turn out.

“The response was good because it is for a worthy cause. Most families have had their relatives or friends helped by hospices in one way or another. They have really given their hearts in support of palliative care.” Singh said.

The event ended with the presentation of certificates to the various groups that sponsored the event.