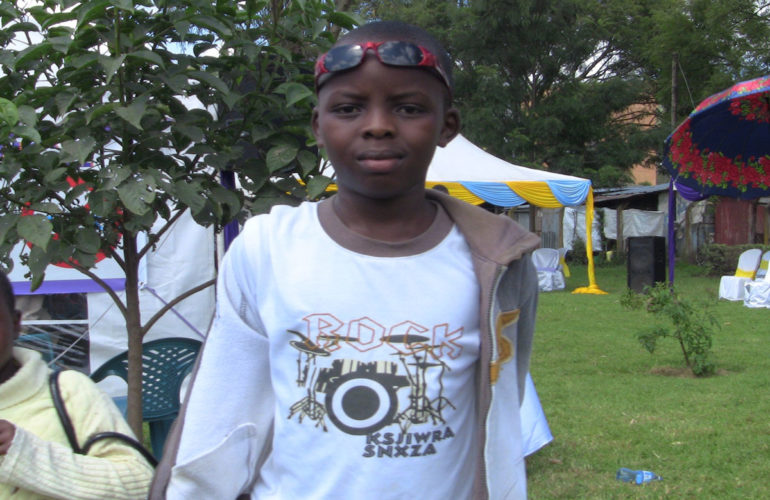 “My name is Emmanuel and am strong and a free normal boy now”. That is how nine-year-old Emmanuel Kipkemoi Kitur introduced himself when we met in Nakuru.

Truly, he was strong, jovial and seemed to have infinite energy. Yet, healthwise, his short life has been action-packed.

Emmanuel was born in 2003 in Nakuru. He was a healthy, playful child. 5 years later, he joined Elimu Nursery School in Nakuru.

His studies went on well until his life took a drastic turn in September 2008 when he fell ill in school and his teachers called his father.

“I rushed to the school thinking Emmanuel had been injured while playing, only to find his skin pale and his eyes white” recalls Kennedy Kitur, an administration police officer.

Kennedy rushed his son to hospital where Emmanuel’s blood sample was taken and sent to a pathologist in Nairobi Aga Khan university Hospital via Nakuru Aga Khan Satellite laboratory.

They carried out tests and the results were shocking; Emmanuel was diagnosed with leukemia.

Kennedy was informed that the disease was dangerous and it needed immediate medical intervention to save his son.

“My son was referred to Gertrude’s Hospital in Nairobi where he was treated for a few months but due to the high cost associated to cancer management, I thought of transferring him to Kenyatta National Hospital.” Kennedy narrates.

“Before transferring my son from Gertrude’s Hospital – Muthaiga, I called a priest and we requested for special prayers for Emmanuel. I still remember part of prayer;

…Remember, also, most merciful and loving Father, all who are sick and dying, and grant that in the solitude of suffering each may truly “come to himself,” and like the Prodigal of the Gospel may at last discover Thy love and return to a Father’s heart. That most bountiful Heart has given them joy of life and youth, hope and desire; and from it all good and pleasant things, all enduring comfort and true delight, descend in copious benediction. Feed them before they die with the Body and Blood of Thy beloved Son, that nothing may be wanting to Thy love nor to their eternal beatitude. Amen.

Some friends told Kennedy to take Emmanuel to a hospice but on enquiring, he learnt that the nearest hospice was in Nairobi and another in Mombasa. He chose to book his son at Kenyatta National Hospital since he had already started undergoing treatment.

At Kenyatta National Hospital, Kennedy says the waiting list was so long but he was advised to book a bed at the private wing. The challenge he had at hand is that his savings and donations were already exhausted.

“I was hopeful that this ailment will come to an end but how this was to be achieved, I left it to God.” He says.

Kennedy says he will not forget the several times that Emmanuel needed blood transfusions forcing him to make numerous calls to friends around Nairobi, as all his family members were far away in Molo, their home.

“Friends’ blood donations were dwindling yet my son needed more blood. I had to devise other ways of not relying on friends. One day I sent a message to one radio station to try and make a plea for blood donation.”

Kennedy’s love for his son pushed him to all corners as he struggled to ensure he kept the breath of life in Emmanuel.

Did the message to the radio station yield any fruits? Join us in part two of this series to out if the appeal was successful as we continue with this heart touching story of a father who did everything to save his son from leukemia.