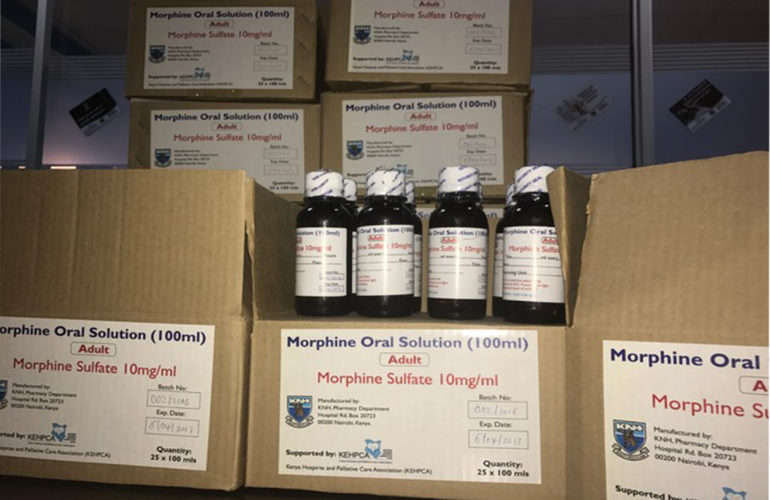 For many years, only one company in the country has been allowed to import morphine and therefore resulting in its distribution being very restricted or better yet, have limited accessibility. Morphine, a true wonder remedy is an opiate type medication, generally found naturally in plants and animals and typically acts directly on the central nervous system to reduce pain. Its wonder medicine portrayal comes from the fact that oral morphine is very efficient in the management of moderate to severe pain while still being relatively inexpensive. Having said that, it is still critical to maintain that many Kenyans continue to struggle with the affordability of the medication due to other financial burdens that come with whichever illness they may be affected by.

Ever since 2009, Kenya Hospices and Palliative Care Association (KEHPCA), the overarching body that supports all aspects of hospice and palliative care throughout Kenya, has been advocating for the allowance of other companies to have permission to import morphine. Great success came in 2011 when two other companies were allowed to import it but that was not enough to ensure that there was accessibility of morphine everywhere in the country. In 2015, based on the procurement of forty-seven kilograms of morphine by the Ministry of Health (MOH) through the support of DANIDA, better distribution to patients will be achieved. As it currently stands, KEHPCA, in collaboration with Kenyatta National Hospital (KNH), Kenya Medical Supplies Authority (KEMSA), the Ministry of Health, Treat the Pain and other stakeholders, the reconstitution of morphine has been achieved with KNH having produced the first batch that passed safety and quality checks and was classified as being safe for human consumption. Treat the Pain has played a key role in supporting the manufacturing of the liquid morphine from the powder procured, for use by government and mission hospitals as well as hospices, being the first time this is happening in Kenya.  The current doctor’s strike has however halted production.

KEHPCA continues to advocate for availability, accessibility and affordability of oral morphine for moderate to severe pain relief but there is still a huge barrier that needs to be crossed. A study done by COCHRANE, a global independent network of researchers, professionals, patients and people interested in health found that morphine taken by mouth produced good pain relief for moderate to severe pain with its effectiveness always standing the test of time. The consumption of pain relief medications such as morphine is however concentrated in a limited number of countries due to the fact that access continues to be based in North America, Western Europe and Oceania. As mentioned by the International Narcotics Control Board (INCB) and Treat the Pain “This imbalance is particularly problematic because latest data available shows that over 70 percent of cancer and 99 percent of HIV deaths actually occur in low and middle-income countries”. As one may assume this is alarming because cancer and HIV/AIDS are merely just the tip of the iceberg when it comes to conditions that usually have pain as a symptom. Pain relief is also needed in other medical situations and ailments such as people recovering from surgery, other pain-causing illnesses such as organ failure and a spectrum of various injuries. As long as access to these pain relieving medications is limited, many people will continue to be denied one of the human rights to which they are entitled to, that being, access to palliative care services. This was emphasized by Dr. Amandua Jacinto, Director of Clinical Services at the Ugandan Ministry of Health during the 5th International African Palliative Care Conference where he said, and “Palliative care must be as available as air.” Pain and symptom management is an important element in palliative care.

The under distribution of morphine in Kenya could partially be due to the stigma associated with the medicine and the fear of potential addiction and abuse in cases of misuse. Health care professionals have however believed it to be worthwhile to use as long as the patients’ pain is accurately assessed, hence the need for continuous public education. Just recently, KNH handed 344 bottles of morphine to KEHPCA for distribution to various palliative care providers to help those currently experiencing moderate to severe pain due to various illnesses.

KEHPCA looks forward to more production and distribution of the medication. This also means that the continuous training of medical professionals in order for proper administration and utilization of the medicine. As mentioned by Treat the Pain, “The problem can be addressed through several approaches including a human rights focus, a policy focus and a training focus”.