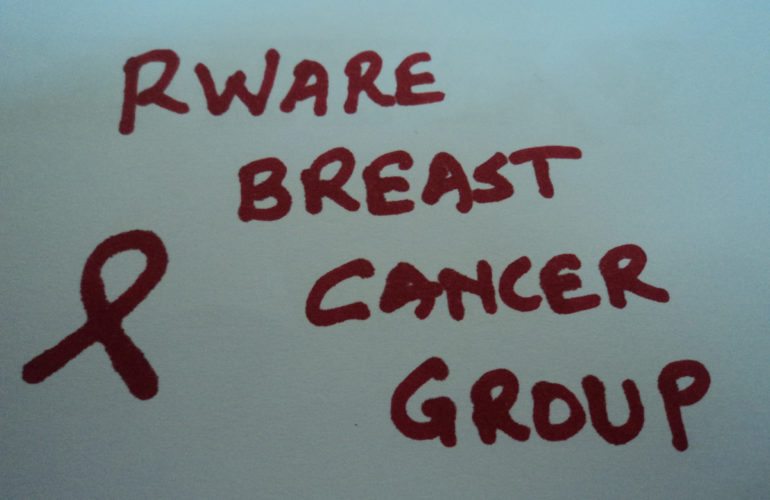 Rware Breast Cancer Group, started by breast cancer survivors in Nyeri, is doing great service to over 70 women who have embraced its membership.

The group is led by survivors who have struggled to defeat the breast cancer while some are still battling with it.

Before the inception of the group, they would visit each other in turns back in Nyeri, cook, eat and pray as a way of supporting each other spiritually and psycho-socially.

“The group has progressed though there are times it would go down in terms of commitment of members but we revive it again.” She says.

She says that if they get word of a patient suffering somewhere, they try to find means of reaching her and help her as much as they can.

“At times we come to Nyeri Hospital and visit patients with breast cancer and we talk as a way of motivating them to continue with the fight.” Amina says

She adds that this support is important for a patient struggling with the disease given that treatment is tedious and demanding a lot of money which is out of reach for many.

The group has been to funerals where children have been left behind by the mother, trying to offer any support they can.

Amina says that they are relieved that chemotherapy can be accessed at Nyeri PGH as the cost of traveling to Nairobi has been exorbitant for members of the group.

Naliaka, a member of the group, says that she had to get saved as soon as possible after she was diagnosed with breast cancer as she thought she was going to die soon.

“I thought the pastor was delaying my salvation during the teaching. When I got saved I felt relieved and got strength to rethink about my life in a positive way.” She narrates.

She says that at some point during her treatment, she had to raise funds to go to Kampala, Uganda for specialized treatment which was not available at Kenyatta National Hospital (KNH) after losing her brother to a road accident, who could have assisted her with finances.

Naliaka says that she did not even manage to attend his funeral. She is still going on with treatment at Kenyatta National Hospital.

Celina says that she was diagnosed with breast cancer after losing her brother and sister at intervals of four years prior to her diagnosis.

She undertook her treatment silently without knowledge of any relative or neighbor. She even went for the mastectomy operation alone at KNH.

“After Mastectomy, I used to walk with a blanket around my shoulder. Due to the uncomfortable nature of not having one breast, I would get a small ball, wrap it in a piece of cloth and put it on the right side of the bra where the breast was removed.” She says.

She later managed to purchase the prostheses and the bra which she says are still quite expensive for most of other members within the group.

Norah says that after surgery and some sessions of chemotherapy, she had to stop due to financial setbacks and her only hope is that finances could be available so that she and other group members in similar state can resume their treatment.

Jane says that she was not comfortable carrying on with her teaching practice without a breast but through the group she managed to get a prosthesis for her left breast that restored her confidence.

She says they are spreading the gospel wherever they can so that other women out there not aware of the ailment can receive the information as well as giving support to others with similar conditions.

Doctor Peter Kiehlmann from Scotland visited Nyeri PGH and says that the group that has been in existence for over 20 years doing a tremendous work.

“Patients give testimonies. We saw a patient who was due for surgery and for three or four days she attended the group’s session, she received huge support that helped her go through the surgery and have hope for life.” Dr Kiehlmann says.

He says that the group lacks funds to access prosthesis, an area that needs support to improve the care for these women.

Dr Kiehlmann is one of the UK mentors assigned to Nyeri PGH to share his experiences with the palliative care team on provision of palliative care and the integration process, enriching the participants trained under the Tropical Health and Education Trust (THET) project with necessary skills, knowledge and encourage them to continue with palliative care even after leaving the hospital via Skype and emails.

Lydia Warui is the head of Nyeri Palliative Care Unit (PCU) previously working at the surgical ward she is actively involved in advising these women on the best way to improve their health in the struggle to defeat the disease.

This is after two ladies (founders) approached her with the idea of forming a group that could offer support among its members.

“Once we opened the palliative care unit we were able to capture more patients going through palliation and treatment and we agreed with the group that the patients diagnosed with breast cancer or undergoing mastectomy could be referred to the group.” M/s. Warui says.

In this way the group has grown to over seventy members but there have been challenges.

M/s. Warui says that most of the members struggle in the management of the ailment as they cannot afford the drugs, prosthesis and along the way some members have lost their live.

During their meeting held once every month, M/s. Warui is able to invite a nutritionist who can talk to them on diet, a physiotherapist to advise on the exercises that they can do at home and other experts to advise the patients in the group.

Rware Breast Cancer Group trusts that as they continue supporting each other for hope to live another day, someone will come their way and cushion them from the high cost of cancer treatment and enable them access prostheses after mastectomy.

Names of group members have been changed