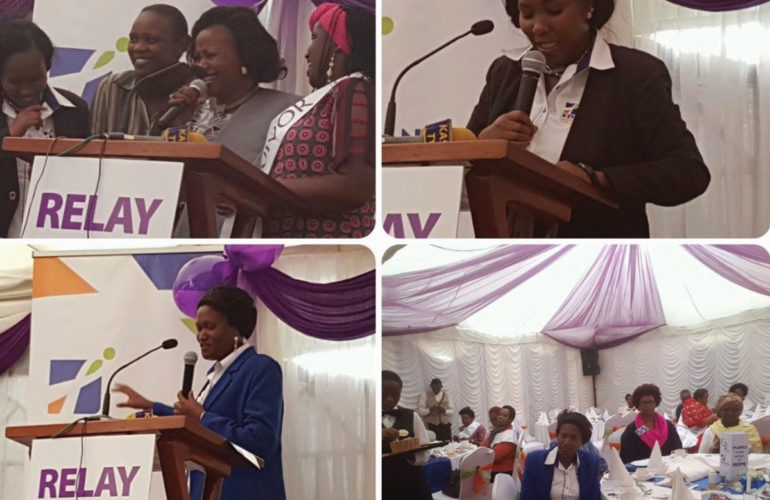 May 31, 2017 | No Comments
Categories: Community Engagement.

KENCANSA, being a voluntary run non-profit making organization continues to try and achieve its core mandate of raising public awareness on cancer as well as try to mobilize stakeholders including the government to prioritize cancer in their planning, programming and budgeting. The event had many who attended including survivors, carers, their partners, and the media among others. It was meant to remind all of us and launch the relay for life 24-hour event that will take place on 30th September 2017 from 10 am to 10 am the next day in Nyayo Stadium, Nairobi. Relay For Life has been licensed and empowered by American Cancer Society to advocate for cancer control management.

One of the speakers was Brian, a throat cancer survivor who danced across the stage as he was introduced. He stated that cancer has made him travel around the world so as to give hope to those who are going through what he went through. Brian had been given 3-6 months to live 8 years ago and yet he is still alive and well, in fact, he is an epitome of how being happy never goes out of style. Another inspirational and striking speaker was Betty, a breast cancer survivor who immediately took initiative after she discovered a lump. Betty’s situation is all too familiar to many Kenyans as she had no idea how she would have been able to cover the cost of treatment. She also reveals the shock after she was assured that it was in fact cancer, something she had suspected but actually getting the results was like someone putting a dagger straight to her heart. “I had always thought that breast cancer was a disease for the rich and for older women, so why me?” said Betty.

As the event continued, we also heard from Rose, Christine’s mother who had to speak on her behalf as the little girl could not be released from the hospital due to unforeseen circumstances. Rose has gone through a lot after her daughter was diagnosed with Neuroblastoma and was abandoned by many soon after. She, however, is hopeful that they will be just fine and that the storm will pass.

The KENCANSA event educated many in the room on various issues. “At the moment, cancer is decimating our population as we continue to sit back and wait for it to be prioritized as a major agenda in our government,” remarked Dr. Karagu from the Ministry of Health. The reminder we were given was that it is only if we are determined and patriotic to our own that we can really reduce the burden. Our government was reminded that there is a dire need for the right infrastructures and the right channeling of resources in order to have many more birthdays celebrated. The death that cancer brings about breaks up families and destabilizes the economies of those families.

The organization continues to be a people-centric association taking the lead in cancer elimination in Kenya through awareness support. It has supported many as they fight cancer and assures that they get correct and timely information on cancer management. Many in the room thanked the organization for what they have done so far and urged them to continue. “It is not over until we have a Kenya without cancer,” emphasized KENCANSA’s Executive Director Deborah.  Let’s all join them as they celebrate, remember, fight back and relay for their fellow Kenyans this coming September.

* Patients’ names have been changed*