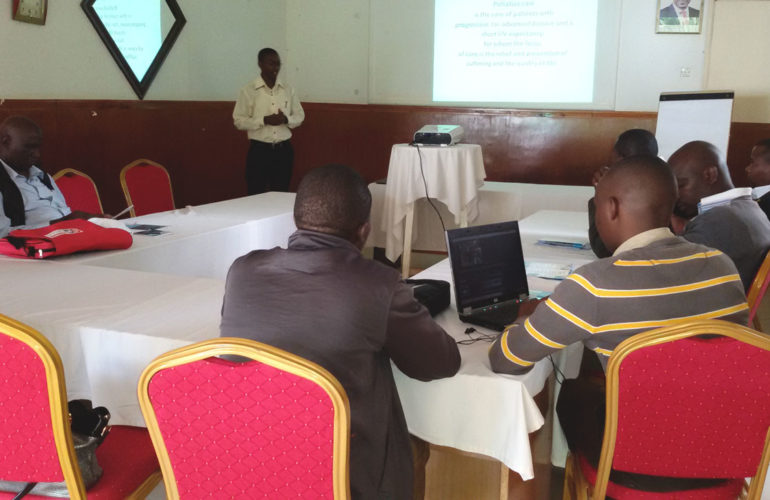 May 20, 2015 | No Comments
Categories: Community Engagement.

Recently, a dozen journalists from the Embu County in Eastern Kenya were part of a meeting with Kenya Hospices and Palliative Care Association (KEHPCA). The purpose of the training was to build lasting relationships between the scribes and palliative care providers in the county and the national association.

Despite having covered news stories in Embu County for a while now, most of the journalists had very little knowledge about what the palliative care unit at Embu level 5 hospital did. As for the Embu-Mbeere Hospice, they had all heard of it but only a few could pin point exactly what services were on offer there.

These points emphasized the need for the meeting that was in progress at a local hotel and meeting spot, Izaak Walton Inn. KEHPCA Senior Programs Officer David Musyoki took the journalists through the basics of palliative care, explaining the need for the service in the country and more so in Embu, where like most parts of Kenya Cancer has become one of the leading killers.

“Palliative care is a component of healthcare that will impact all of us at some point in our lives. We may need it or know of someone who will need it. As such, it is important that everyone has an understanding of what palliative care is. Your role as journalists is very important in this journey we are on. We all need to walk together so as to reap the benefits of advancing end of life care in Kenya. The power of your voices as journalists can best amplify the message we are sending across the borders,” said Mr. Musyoki.

Mr. Musyoki also spoke about the World Health Organization statistics on cancer that show that approximately 82,000 new cases are reported annually in Kenya. He also highlighted that the national prevalence rate for HIV&AIDS is at 5.6%. These statistics point to the need for palliative care to be integrated more into the national healthcare system.

He further added that palliative care consists of care for all of an individual’s needs. These include:-

The journalists also engaged with two palliative care nurses from the Embu Level 5 hospital. This was very crucial because after all is said and done these two groups of people will remain on the ground. Therefore, they needed to engage and get acquainted with each other to support each other’s efforts.

Through the interaction, the scribes learnt of a family whereby three young children have cancer and require treatment and care. Contacts were exchanged and the journalists will look for time and go highlight the case of this family in need. Charles Wanyoro, a correspondent with one of the leading dailies, Daily Nation, like the rest of his colleagues was particularly interested in the family of three and the daily running of the care unit at the hospital. The scribes all said they would make a point of visiting the care unit and the Embu-Mbeere hospice to get a better understanding of end of life care.

The interaction was a success and ultimately, it is hoped that it will go a long way in fostering cooperation between palliative care stakeholders in Embu County.