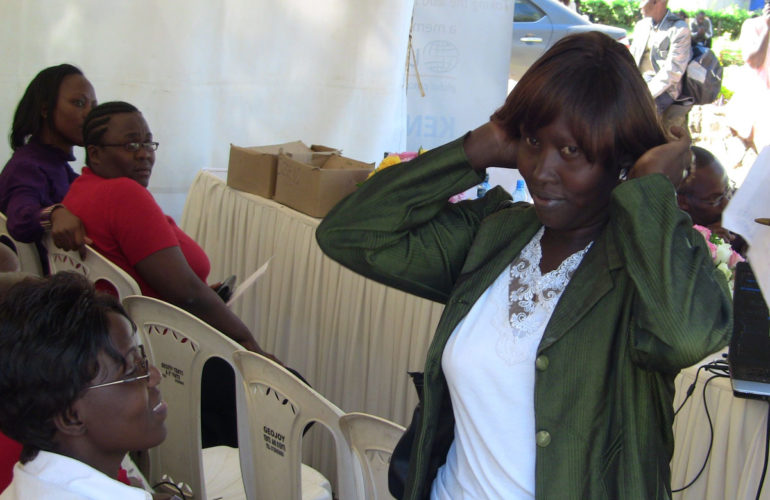 Over thirty women survivors of breast cancer congregated at Kenyatta National Hospital to receive breast prosthesis and wigs from Kenya Cancer Association (KENCASA) to boost their self-esteem after losing their breasts to cancer and hair to chemotherapy treatment.

This follows an event dubbed ‘shave for cancer’ held in October last year where fellow women shaved their hair in solidarity with their colleagues who lost hair during breast cancer treatment.

As a result of the successful event the association has been able to extend this special new year’s gift to some of the cancer survivors in celebration of their battle with the disease as well as wishing them good health and prosperity as they concur cancer.

To celebrate this milestone, the KENCASA chairperson Mrs. Ann Korir said that the event was an important occasion to join fellow sisters and mothers in sharing with them through their unfortunate cancer journey.

Mrs. Korir said that this was an opportunity as an association to extend hugs through such special occasion as a build up from the event held last year.

She said that despite efforts made by the government to pass the cancer control bill, which was spearheaded by the association, the association hopes that the bill will be operationalized to enable tens of thousands of Kenyans seeking treatment in public facilities access affordable health care.

She requested the Ministry of Public Health and Sanitation and its Medical Services counterpart to ensure that the strategic plan in the cancer control bill does not remain as a good document in the shelves, but set up a team to see implementation measures that will not only help in reducing cancer but aid in early detection and comprehensive treatment.

“It is our prayer that the government shall undertake an effort to ensure reduction in the number of deaths from cancer and that early screening for cancer shall be made universally available in all government referral hospitals to help in early detection of the ailment.”

She reminded attendants that cancer affects all regardless of age sex or states and all should join in the fight against it and educate ourselves on the warning signs of cancer and there after educate our families and friends and advocate for early screening especially to those at risk of cancer.

Dr Betty Bonass, head of breast imaging unit at Kenyatta National Hospital, thanked KENCASA for the great initiative, saying that it is something that ought to have been done many years ago.

“It is a course that will go a long way in making Kenya a great example in the whole of Africa.” Dr Bonass said.

She thanked the survivors for their brevity in turning out to be seen as a way of showing the world their effort in fighting breast cancer to the end.

“From statistics that we have, breast cancer is the number two killer of women in terms of cancer. In the developed world it is going down but here, it is on the rise.” She said.

She added that in the last two years, statistics indicate that many of the women are being diagnosed earlier but the challenge that KENCASA is battling with is the treatment and surgical costs.

Dr Bonass said that Kenyatta National Hospital has done a lot in reducing the cost of mammography adding that they are the most affordable within East Africa and the best equipped in the South of Sahara for diagnosis and treatment.

She said that the hospital has enough oncologists and they are working on improving the relationship with patients to ensure that they addressed all patient questions adding that this is personalized service.

Dr Bonass urged the survivors, being champions of breast cancer, to advice all women above 40 years to take their basic mammogram done to rule out any pain they might from being cancer related.

Samuel Barae from the Embassy of the United States Health Unit said a colleague at work wanted to donate her hair, something that is not a norm locally.

It is then that we approached KENCASA on the plan, initially our colleague being the only one to shave, but as the plan progressed, more women were willing to shave.

Barae said that there was bidding of the hair that was shaved. Proceeds and donations from well-wishers and partners in the event were able to get the prosthesis and wigs for the survivors.

“We are happy that we participated in it at its humble beginning and I foresee it becoming an annual event to benefit more cancer survivors.” He added.

Penninah Kaluki, a cancer survivor, said she has been with breast cancer for over six months and she is undertaking chemotherapy.

“I thank KENCASA for the good work they are doing and I urge them to continue to reach out to more women and boost their self esteem. The wig will enhance my beauty and the prosthesis will restore my womanly look.” Penninah said.

She urged all women to come out in large numbers for screening so that if they are detected with breast cancer, they can undertake treatment before it gets to complicated levels.

In the October event, nine year old Abigael Owino shaved hare hair to stand in solidarity with her friend’s mother who was a cancer survivor.

KENCASA vice chairperson David Makumi said that the money raised from the event at Village Market was used to buy imported prosthesis through a local dealer while the wigs were donated by a local company.