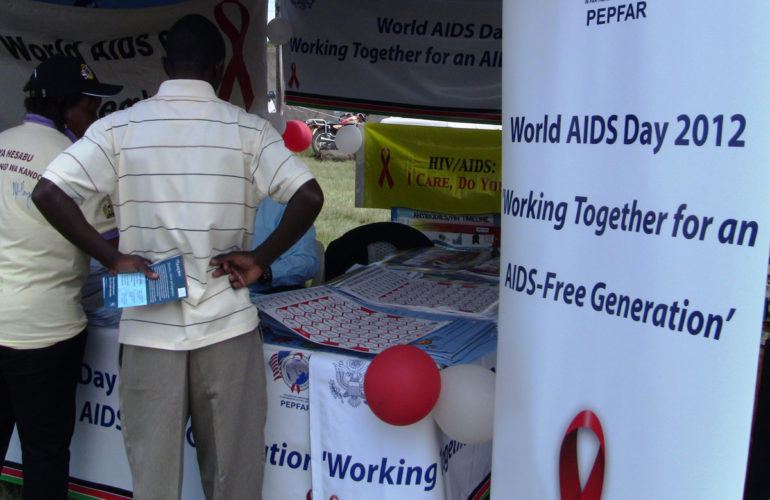 The number of HIV cases in Kenya has risen from 1.4 million in 2007 to a current estimate of 1.6 million despite the stringent measures made by the government to reduce new infections.

With this estimates, Kenya’s epidemic becomes the fourth largest in the world in terms of population after South Africa (5.6 million), Nigeria (3.3 million) and India (2.6 million).

Further to this, statistics from HIV and AIDS projections in the country indicate that an estimated 1.8 million Kenyans will be living with HIV by 2015.

Revealing the shocking statistics during this year’s World Aids Day celebrations, the minister for special programmes Esther Murugi said that this will result into an increase in the number of Kenyans in need of more costly second line treatment for HIV.

“The government is not ready to lose any more of its citizens to AIDS and it should be commended for the significant steps taken in the fight against HIV and AIDS.” Murugi said.

She added that 72% of those eligible for HIV treatment have been put on Anti Retroviral Therapy (ART) and provision of treatment to those living with HIV has steadily been enhanced from covering 11,000 people in 2003 to the current 540,000 of the eligible 750,000 people.

“Perhaps most concerning, is the suitability of the HIV programs due to the effects of continuing global financial and economic difficulties. In 2010, total HIV assistance worldwide declined by about 10%.” The special programs minister said.

Given that 80% of this funding from external sources, which at the moment looks unpredictable due to the recent global financial crises, Murugi said the demand for strict accountability for financial resources and related results has never been greater in Kenya.

“The government is geared towards redoubling its efforts to mobilize needed resources locally and to also ensure that all funding in used as effectively and efficiently as possible.” She affirmed adding that HIV Prevention is also a Flagship Project under the Vision 2030 making it a significant developmental factor in years to come.

Murugi said the government is exploring means and ways of establishing a Trust Fund for HIV/AIDS and Prioritize Non Communicable Diseases. In an effort to realize this exploration, the special programs minister said there is a bill in parliament which aims at, among other things, strengthening HIV and AIDS response through creating a stronger coordinating body that can better coordinate an hold accountable all other entities working on HIV and AIDS programmes.

Gracing the occasion as the guest of honor, Vice President Kalonzo Musyoka said that Kenya is at cross roads with the revelation of these figures and there is need to declare total war against any new infections if we are to win.

Musyoka said for this war to succeed, all stakeholders should arise and be involved in every little way including pushing partners to get tested.

“I get tested every six months and I see no need for anyone to fail taking this bold step.” Musyoka said.

Musyoka applauded Kenya Hospices and Palliative Care Association (KEHPCA)  for the effort it is putting into caring for HIV patients saying it has helped in boosting their quality of life.

He said that the preference of mothers getting infected is high and encouraged them to get tested regularly to reduce the number of orphans in Kenya.

This, he said, will also reduce the new mother to child infections as we gear towards zero new HIV infection as per this year’s theme, “Getting to Zero”.

He said that Voluntary Medical Male Circumcision (VVMC) is on target to reduce new infection among males but was quick to note that the procedure should not be construed to mean permanent prevention from HIV contraction.

The vice president urged parents to take their boys to certified VVMC centers to reduce the risk of contracting the virus during the operation.

“Even the grownups who have not undergone the cut due to outdated cultural beliefs should visit these centers in an effort to reduce their vulnerability of contracting the virus.” Musyoka said.

He commended the group that started the equity tribunal, a one of a kind in the whole world, saying it is a project that will see issues of those with HIV and AIDS looked into amicably.

Musyoka said that the tribunal will go a long way in reducing the stigma that has been a challenge to deal with in the country and urged HIV and AIDS patients to embrace it in solving any issues that affect them.

He commended the US government for the continued support in supplying ARVs that has helped Kenya in the management of HIV and AIDS in the country.

Ambassador of United States of America to Kenya Mr. Robert F Godec said the US government has invested over $2.5 million towards the management of HIV and AIDS in Kenya.

He added that the US secretary general recently announced a blue print whose aim is to look at the efforts being made to contain HIV and AIDS in line with the Millennium Development Goals.

He said that continued it is in the heart of the American government to give additional funding support towards smart investment in the continued believe of containing HIV and AIDS.

The UNAIDS Country Director Maya Harper said that there has been a record 60% reduction in mother to child infection as Kenya has put in place measures to encourage expectant mothers to deliver in health care centers where HIV testing can be done hence prevent passing on the virus to the child during delivery.

“Let us commit ourselves in amplifying the effort we have had before to reach to zero new infection, zero stigmatization and zero discrimination against those with HIV infection.” She said.

Kenya looks forward to the participation of all sectors, formal and informal, as the campaigns to eliminate HIV and AIDS intensify in the coming years as outlined in the Vision 2030 economic blue print.