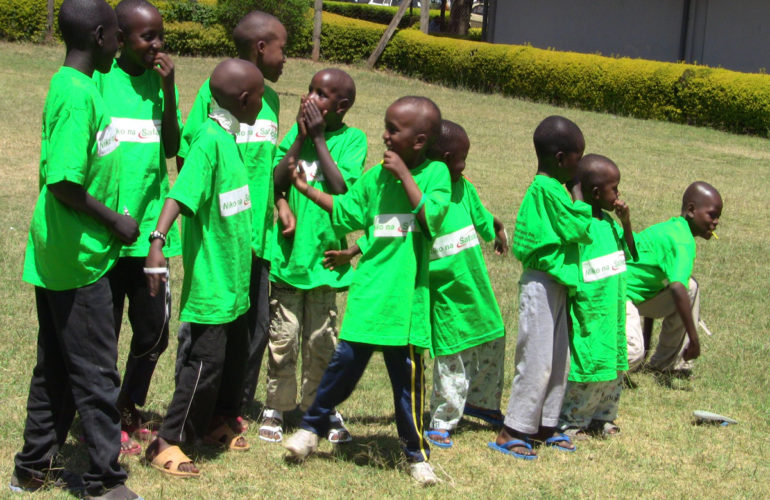 The event organized by Hope for Cancer Kids (HCK) saw the children play in the sun, an opportunity that rarely comes their way.

The HCK coordinator Wanja Mwangi said the initial plan of having a small walk around the hospital had to be cancelled due to road construction ongoing around the path they had planned to take.

“We had to bring the kids out for fan and I am glad that the event has been a success despite a few challenges that we were able to overcome.” Said Wanja.

Several organizations voluntarily come to support HCK with food, playing materials, pitching the tent at the venue and installing the bouncing castle.

“I am grateful for all who supported us as I was overwhelmed by various activities that led to the success of this day.” She said.

The HCK coordinator thanked the hospital for allowing the kids to come out in the sun and have fun.

She said that HCK is an organization that is growing hence the need for support as they look after the kids with cancer.

“Most cancer related organizations tend to focus on adults forgetting that kids are also vulnerable to the ailment.” Wanja said.

She said that the organization helps affected parents register with the National Hospital Insurance Fund (NHIF) to cushion parents from the bills incurred as their kids undergo treatment at the hospital.

Wanja said that the little money they get from selling the donated stuff such as t-shirts go towards paying the NHIF premiums.

She appealed for the government to consider adding the insurance NHIF offers from  180 days to 250 days for the children.

“The government should also expand cancer screening for children for early detection because some children come when they are too ill and I get to lose my children which is not fair for a child.” She said.

Kenya Hospices and Palliative Care Association (KEHPCA) Executive Director Dr Zipporah Ali said that there is need to support children with cancer as some parents neglect them.

“Hope for Cancer Kids not only supports the children with cancer but helps bring together the parents and try to address their psychosocial needs.” Dr Ali said.

Metrine Namalwa, a social worker student helping in the care of the children, said most of the kids are discouraged and have no energy for creativity.

“We have a group called Sarakasi who organize sessions where the kids do paint work, sing and play to enhance their skills.” Namalwa said.

She said that there is need to encourage the kids and their parents and give them hope in order to understand that cancer is not a death sentence.

The kids had fan playing with toy cars, football and having fun in the bouncing castle after enjoying a special cake made for them by HCK.