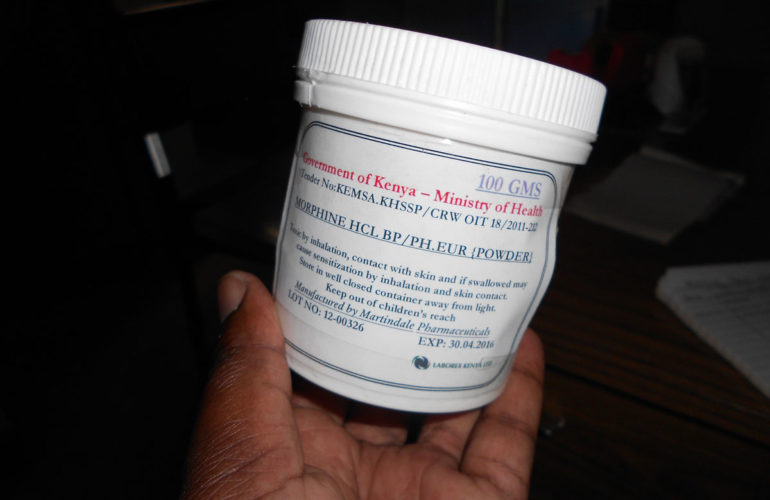 After the Ministry of Health’s commitment to purchase 22kg of Morphine this year, Meru Level 5 Hospital has become the early beneficiary of the already acquired 2.2kgs.

“I believe this amount we have received from the government will take us up to April 2014,” says Stella.

She says that they have already started using the morphine which was collected by the pharmacist in charge at the hospital and their patients are receiving it free of charge.

“We previously had a shortage of morphine due to lack of constant supply. We supplemented what we could get from the hospital with the one we received from Kenya Hospices and Palliative Care Association (KEHPCA).” She adds.

The palliative care nurse added that the hospital had started purchasing the pain relieving drug two months prior to the receipt of the government morphine.

“We got a chemist out of town that helps us with reconstitution and this has made our work easier,” says Stella.

The unit has enrolled about 334 patients and they have an active number of 55 – 60 patients every month and with the support of morphine from the government, Stella says they are no longer worried about enrolling more.

Despite having conducted some Continuous Medical Education (CME) sessions on palliative care at the hospital, most of the staff still fears using morphine instead they call the palliative care team to the wards.

Stella is optimistic that with time, the staff will understand that they can also give this care at the ward in their own capacity.

She says that the coming into operation of the unit was not an easy task as the hospital never took it as a priority, but she is happy that their effort bore fruits.

“We send our reports to KEHPCA and, to harness availability of this data on palliative care, we are working with the county health officer to establish a registry.” She said.

She notes a gap in data collection at the outpatient as the staff does not record the number of cancer patients seen adding that the unit is working with a doctor to help the Medical Officers and Clinical Officers identify and keep a record of these patient.

Besides receiving patients at the unit, the staff at the unit conduct ward visits to see admitted patients in need of palliative care.

Stella said that she is forced at times to do home visits close to the hospital using her own means to check on patients who are not able to come to the unit.