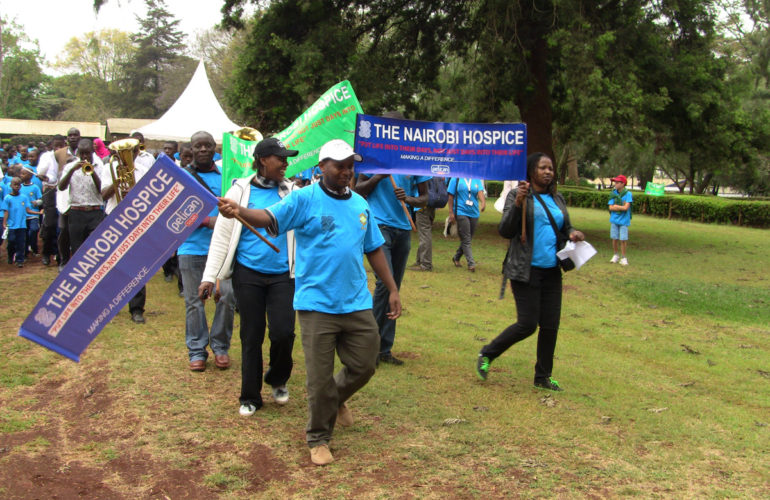 Nairobi Hospice held their annual Charity Walk to raise funds to support their care for patients with life limiting illnesses.

Flagging off the walk, the Chief Guest Mr. Benard Maina, from Heritage Insurance said that it was important for every individual to take part in the walk to help raise the much needed funds.

“We are walking to help those with life threatening illnesses afford the drugs to make their life more comfortable.” Mr. Maina said.

Nairobi Hospice Treasurer, Mr. Mugo Wa Karanja said that it was joy and encouragement to see such a large group of people come out in large numbers to help the Hospice to raise funds.

“You are doing a great thing in supporting the hospice to add life into their days and not just days into their lives.” Mr. Karanja told the participants.

Nine year old Ted Nightingale, who has constantly featured in the walk since he was three years was present and was given a chance to address the young and old at the event.

“I started walking at the age of three years and I am always willing to do this every year to help raise funds to assist those with cancer. Let’s walk!” Nightingale said to participants.

During the walk, he said that his mother gives him the motivation and support to keep walking each time Nairobi Hospice organizes a charity walk.

Angela, 13 years old and a candidate at Brookside School, said she has participated in the walk for over five years, making to the list of young participants in the walk.

“I find if fun coming and walking alongside other kids. It is also a way of keeping fit having to walk through the 10km track.” She said.

Security within the flag off and finish point was provided by Securex with Kenya Police, Forest Service Unit and Forest Ranger officers.

Constable Paul Cherutich from Hardy police station said that marking of the track was done a day before the walk but the rain forced them to redo the track early that morning.

“We have not had any other challenges as we were dropping our officers at vantage points within the forest.” Constable Cherutich said.

A number of volunteers were present at various points to ensure the event was well coordinated.

The volunteer in charge of security, snacks and t-shirts, Stella Mwaris, said that she had come to touch a life of someone by offering support to the hospice.

“We should never tire helping a needy person.” She added.

Volunteer Emily Nicole in charge of stamping of cards and distribution of water said it was encouraging to see the small kids taking part in the walk.

“Those who remain back at home should wake up and join the walk and help support the Hospice to take care of patients with life threatening illnesses.” She said.

The participants had to endure the mud as they navigated a road under construction due to a downpour the previous day and they were not deterred from taking part in the event.

Nairobi Hospice Fundraising Officer M/s. Eunice Mwangi said that it took her two and a half months to prepare for the event.

“The response was good thought there are some schools and corporates who signed up for the event did not attend but was grateful for their support.” M/s. Mwangi said.

She said that about 25 corporates and 35 schools signed up for the event and was thankful for each and everyone to spared time to come and join Nairobi Hospice for the walk.

The main sponsor for the walk was the Insurance Regulatory Authority (IRA) whose mission is to effectively and professionally regulate, supervise and develop the insurance industry in Kenya.