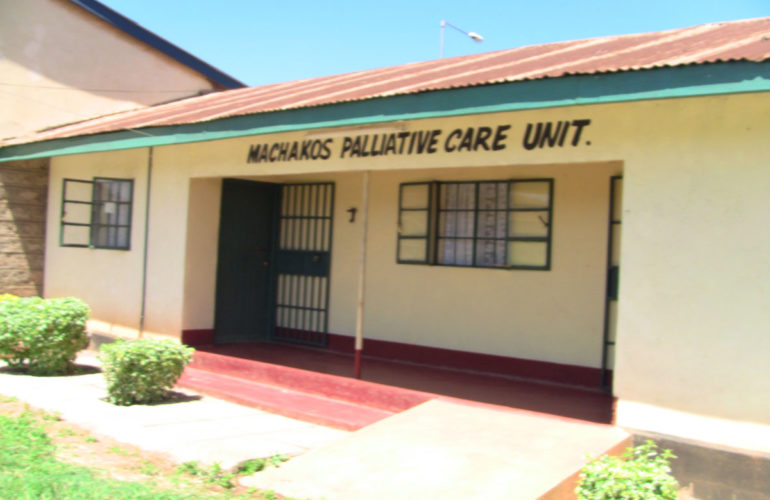 With the able hands of Mr. Elijah Musau, the head of palliative care unit at Machakos Level 5 Hospital, the unit officially started operation in April 2011.

Mr. Musau has since then been in the forefront of ensuring patients from various sections of the hospital are referred in time for their services to have an impact on them.

“We are trying to get our referral system in order so that we can track our patients and offer the services we are mandated to give to all appropriately.” He said.

He added that awareness creation has seen an increase in cancer cases being reported in the country.

The medical superintendent at Machakos district hospital, Dr J.O. Osumba said people are becoming aware of cancer as a threat to their health and many are coming out for screening.

“This increased awareness has enabled most cancer infections to be detected at early stages where they can easily be treated.” Dr Osumba said.

He said that pancreatic malignancies are on the increase and prostate cancer is common for men in Machakos district.

“This year alone, we have been able to attend to 358 cases of patients with cancer, treated those we can and refered others to Kenyatta hospital as the situation demanded.” He said.

Dr Osumba said that those cases whose conditions are at advanced stages had previously been referred them to Nairobi hospice for palliative care.

“Referring them to Nairobi 63 kilometers from Machakos, has been a challenge as some of them wonder why they should travel all that distance yet the information from our side indicates that their condition is life limiting.” He said.

The medical superintendent said he is happy that they have been able to start a palliative care unit within the hospital premises to offer palliative care services to these patients.

The head of the unit, Mr. Musau, said most health care providers  at the hospital have had a chance to have a feel of what palliative care is all about through training by Kenya Hospices and Palliative Care Association (KEHPCA), hence getting referrals has not been a major challenge.

“I consider most of the departments whenever we have a learning opportunity so that we can have a wide knowledge base on palliative care within the hospital.” He added.

He said that they have many HIV patients, a third of whom are in need of morphine due to severe pain, which needs management.

He said that they have a trained pharmacist who has been helpful in reconstituting powder morphine to liquid morphine for oral prescriptions and the clinical officers have been helpful in prescribing it to those patients who need it.

“Our surgeon is also well versed with morphine” he added

Currently, morphine to provincial general hospitals that have integrated palliative care services is supplied be KEHPCA in collaboration with the Ministry of Medical Services and the Ministry of Health Public Health and Sanitation.

KEHPCA’s Executive Director Dr Zipporah Ali said they are working on modalities to see that such hospitals get supply of more morphine from the government.

Dr Ali said that most non-communicable diseases lead to severe pain which ought to be managed by use of strong opioids, morphine being the recommended for use in such situations.

“The government has already ordered for 20 kilograms of morphine expected to arrive in February 2013 and we are looking into ways of having a central place where it can be reconstituted before it is distributed to these centers for use.” She said.

On training needs in palliative care, Dr Ali said that they are looking for specific needs for each hospital as they are at different levels of integration.

“Find out from the staff members on the training needs so that we see how best we can offer such training at the earliest opportunity beginning next year with availability of funding, adding that it is good to have all doctors understand the concept of pain management.” Dr Ali told Musau.

She said this will enable them have a common ground when addressing palliative care issues within the hospital and even beyond.

“KEHPCA wants to develop Machakos palliative care unit to be a mentor unit as well as a clinical placement site for other units in the region and beyond.” Dr Ali said.

Mariah Blair from American Cancer Society said that in support of access to pain relief, they are working on modalities to improve access of morphine to the hospitals.

She said that lifestyle has a role to play in the increased number of cancer cases especially smoking adding that they are involving relevant stakeholders to look into ways of making cigarettes more expensive in an effort to reduce smoking.

Mr. Musau said the palliative care unit has only one nurse stationed at unit thus work becomes overwhelming most times.

He said such a situation limits them on the number of clients they can serve; giving an example of disclosure to many patients, which he said, can be exhausting.

In carrying out home visits, Musau said the hospital has no utility vehicle making this venture a major challenge in cases where homecare is vital.

He said they have a shortage of drugs especially adjuvants adding that if such issues are addressed, their services to patients will indeed provide hope for mankind.

Machakos Hospial has a bed capacity of 520 with occupancy of 70% -80% through various seasons and wards.