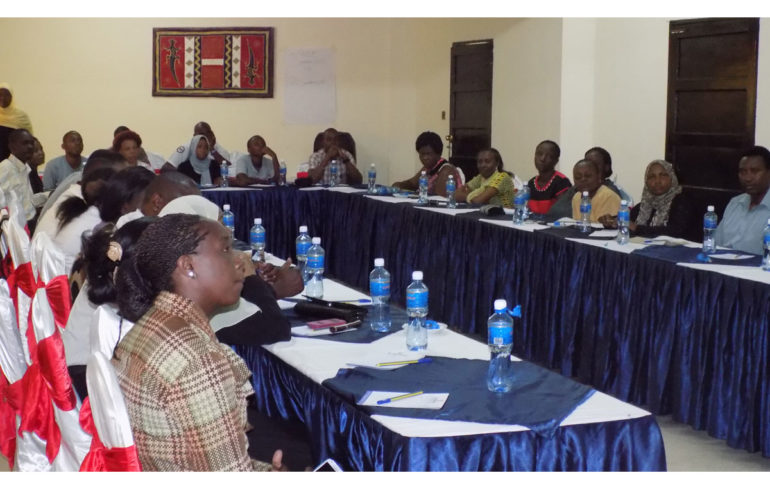 The objectives of the training as envisioned by the coordinators were that the healthcare professionals could at the end:-

– Describe why and who needs palliative care.

– Describe how they can offer palliative care services within their settings.

Attempts to introduce palliative care in Malindi had been earlier made by a group of individuals who came together, raised some funds and identified a building. However, for various reasons and challenges, implementation did not take place. In March 2012, three health workers (a doctor, nurse and pharmacist) attended a one week orientation followed by another week of practical experience at Coast Hospice.  In July of the same year, they were joined by a volunteer palliative care consultant – Dr. Eleanor Forster from Canada and service provision started despite many challenges such as competing tasks, lack of space, ignorance about palliative care among health workers and the community, and high poverty levels of those affected. In January 2014, two nurses received sponsorship to pursue a Higher Education Diploma course in Palliative Care. Following on that good news, the hospital administration identified a building where palliative services were to be offered and it was officially opened in February 2014. Services at the unit are offered free of charge with the government waiver system in use for those who cannot pay for other services within the hospital. Despite this growth, there is still a shortage of palliative care practitioners.

Training on day one saw the Malindi sub-county team share about the various definitions of palliative care; why most of Kenya’s health systems are designed for treatment and prevention of diseases, but as these services are being offered, there is a big need that is not being met, the one for palliative care. They were then taken through different settings where palliative care can be offered:-

– Palliative care within home based care

Pain was defined by participants as:-

– Uncomfortable feeling of the body

– Undesirable feeling that can be physical, emotional and psychological and all this was summed up by pain being ‘what the patient says hurts’

After this participants were taken through the principles of pain control and the treatment for this was analgesics given:-

– By mouth – may also be taken rectally or buccally

– By clock – taken at regular intervals as per duration of action

–  Psychosocial support is still a challenge e.g. a male patient may feel uncomfortable to discuss some issues with a female nurse. Thus the eed for having both genders giving palliative care support

–  The number of patients who have accessed palliative care services at Malindi palliative care unit for the year 2014, were 153, out of which there were 46 (30%) deaths. All of these patients are those who were able to access service at the unit within the hospital

–  This shows that a great of proportion of the population still remains unreached either because they are not aware of the services or the distance and lack of funds for transport due to high poverty levels. There is therefore need to decentralize palliative care services up to the dispensary level and outreach service- to- hard to reach areas.

–  There is need to employ more staff such as – social workers, counselors and occupational therapists in palliative care clinics

–  Creating awareness of palliative care to the community

–  To have a standardized data collection tool

–  To avail cervical cancer vaccine in the county

–  To develop a curriculum for training at the community level

–  Participants raised fears about using morphine such as:-

–   has side effects such as : respiratory depression and is very sedating

–   the belief that ‘starting morphine means that the end is ‘near’

–  The participants were informed that their concerns were valid, however, in palliative care the need for morphine is identified after impeccable patient assessment and if used for the management/ control of pain at the stated doses its benefits outweigh the fears

–  Health talks be enhanced in all health facilities

–  Involve consultants, medical doctors and all other stakeholders on matters to do with administration of chemotherapy

–  Have in place waste disposal of radioactive materials, drugs, and infusion sets used to administer chemotherapy

–  Pediatric dosage for morphine to be given to the pediatric ward

–  Creating awareness to the community about the palliative care

At the end of the two day training, all the participants collectively agreed that everybody has a role to play in palliative care and that we need to support one another, including the community in order to succeed.

One of the coordinators Matron Asanta Komora requested the participants to view palliative care positively and be personally committed to it despite its challenges. The reality is that everybody needs it regardless of our individual differences such as race, tribe, religion, social status amongst others; so we should all team up and give our best because PALLIATIVE CARE IS EVERYONES’ BUSINESS!