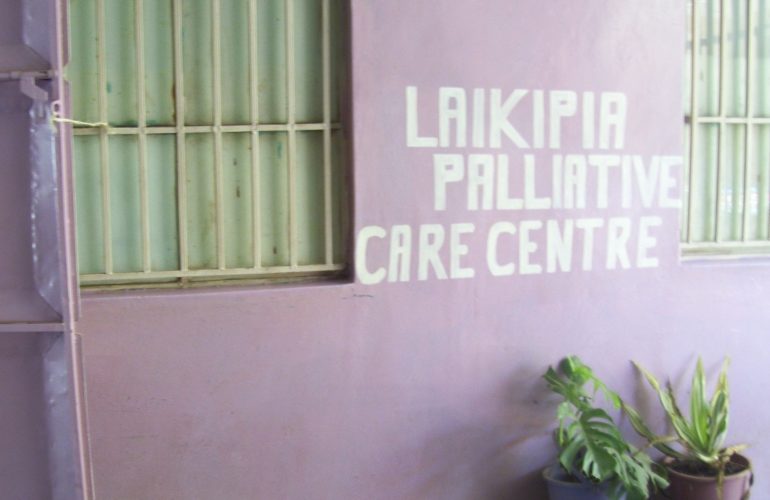 Laikipia Palliative Care Centre (LPCC) started its day care sessions recently and stories of patients and the support they are receiving from the centre speak volumes.

Miriam Ali, a 19 -year-old girl from Majengo slums in Nanyuki is a brain tumour survivor attached to LPCC.

Her problem started in 2010 while in form three with a constant headache but she took it as normal and often took pain killers to cool it down.

The following year, the pain became severe accompanied by a swelling on the right side of her neck. Not even painkillers would ease it. Whenever the teacher got in class she would feel dizzy and drop on the locker.

Mariam made several attempts to seek permission from her principal but in vain. The principal always argued that Mariam was making excuses so that she could evade learning. Besides, that was her final year and she ought to be serious which according to the principal, she was not.

Mariam planned to sneak from school on several occasions but she thought twice and decided not to break school rules. She approached the deputy principal and after explaining her situation, she was granted permission to go home.

Once home, Miriam and her father went to see a doctor. After explaining her condition, the doctor suggested a biopsy which was later sent to Nairobi for histology.

“After two weeks we went to pick the results as advised. The doctor took long to break the bad news but finally the news was in, I had cancer of the brain. I did not cry neither did the news sound shocking as the doctor took time to have me composed before relaying the message which I easily consumed.” Miriam narrates.

Her dad however could not stand the sad news as he broke down. Miriam could not believe it.

Her treatment soon commenced and she underwent through chemotherapy and radio therapy in Nairobi.

“I had to relocate to Nairobi so as to save transport cost. My dad asked his friend if I could stay with him. The friend generously offered me accommodation.” She says.

According to Miriam, she was forced to return home as his father’s friend did not treat her well.

While at home, a friend introduced Miriam to Laikipia Palliative Care Centre (LPCC) and after contacting them, they came to visit her at home before she could even know where the centre was located.

Though she got pregnant and gave birth to a child during the period she was out of school, Miriam says the little angel would not stop her from achieving her education for she went back to school and sat for her final exams in 2012.

“I am still under medication and I know I will defeat cancer soon. I truly thank everyone who has and is still walking with me down this road. May God bless all of you abundantly.” She concludes.

On behalf of her late mother, Mr Ndua says, “The team really walked with me in this journey before my dear mother passed on. If she was alive today she would testify this. Only God can readily understand how grateful I am for the hospice.”

Mrs. Dorcas who lost her cousin to cervical cancer says, “At first it was only my suffering cousin and I but when the Laikipia Palliative Care Centre came in, the burden was spread. They gave us a mother to child comfort. I am so much thankful to the LPCC team.”

Mr Francis Maina aged 54years, a survivor of cancer of the colon while giving advice to fellow patients in one of the day care sessions said, “Keep yourself busy and the word sick won’t even ring a bell. That is one thing the LPCC team tells us and it’s exactly what I do. I am always in meetings or doing my business and with that, I become healthier each day. I don’t know what would be of me if it were not of LPCC.

Mrs. Pricilla Muthoni says, “The LPCC team has strengthened me to continue taking care of my 93-year-old mother-in-law suffering from buccal mucosa cancer . Thanks for the good job you are doing.”

Mary Wairimu aged 47 years says, “The memories of how my breast cancer tortured me both physically and socially are still fresh in my mind. Physically the pain was totally unbearable while socially I was stigmatized because of the stench from my breast. People in social gatherings and matatus would all run away from me. However, when the LPCC team came in, my confidence resurrected. They helped me take my medication positively. I no longer care about how people take me because I know I did not choose to be sick. There’s only one gift I can give to LPCC and that is to declare God’s blessings in abundance.”

80-year-old Ann Gathoni also shares her appreciation.  “Whenever I got into the theatre for my breast surgery I always told the doctor not to sedate me before I prayed. This is because if I were to die I wanted to die clean. To my surprise I survived. “From that day I realised that my stay on earth is not over until God says so. The LPCC staff helped me live this realisation by giving me drugs to ease my pain. In each day-care session, they always want me to speak because they believe I am of great encouragement to the young cancer patients. I do believe I am able to mentor another patient’s life and I appreciate the work LPCC is doing to us.”

LPCC is a hospice that became fully functional in 2010 and is an autonomous charity organization in its operation. LPCC cares for and support patients and families facing life limiting illness especially cancer and HIV& Aids. The hospice has a mobile and an outreach program that have been setup to address the palliative care needs of the urban, rural and remote areas of Laikipia and its environs.