Supported by Hospice; now actively involved in its activities 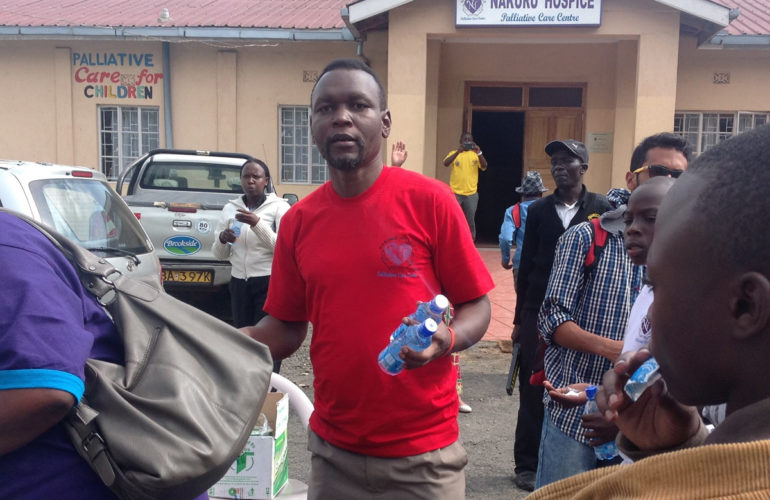 Mr. Paul Owino, married and a father of three children is a psychosocial counselor who was diagnosed with leukemia, a disease that he has battled with for many years.

He has gone through a lot but through the mighty hand of God he is a jubilant victor whose story dates back to 2011.

His condition started in 2011 when he felt unwell with symptoms of general weakness and on/off joint pains that made him seek medical attention. He was then a farmer in Timboroa.

The health care facility he visited put him on pain killers and diclofenac tablets which he took for a long time.

In March 2013, he moved to Athi River to work as a supervisor in an excavation project.

On 1st June 2013, Labor Day that he decided to visit his family back home in Nakuru and while on this visit he started having symptoms similar to those he had previously.

He was referred to AMEC Laboratories LTD in Nakuru town for further tests whose results Mr. Paul presented back to the referring doctor for further advice.

The doctor referred him to another senior doctor who disclosed the results of the test to him.

“Paul, I have good and bad news for you but I have a feeling that you can handle this,” the doctor said to Paul.

The doctor continued, “According to the results, you could be having leukemia.” The delivery of this information proved hard for Paul to handle being a young man and the sole bread winner in his family.

He was counseled and informed that the illness could be managed. He was hopeful when the doctor told him that the discovered leukemia was manageable and that without this management, his chances of living were minimal.

The doctor referred him to Kenyatta National Hospital (KNH), a facility he accessed with difficulties in walking as a result of his deteriorating condition and little financial muscle.

Following a Bone Marrow Aspiration done at Nairobi Hospital, he was informed three days later that his condition is manageable.

Paul’s condition was managed at KNH and later referred to join Gee pap, a special medical program at Nairobi Hospital in collaboration with Max Foundation in USA that manages certain special condition.

The doctor later advised him to be seen at Nakuru Hospice for other symptom management.

All through, Paul was struggling with his illness alone. He went home but later developed worsening symptoms that led to admission and management through transfusion at Nakuru PGH.

Despite the side effects from the drugs he was taking and the nutritional problems due to lack of appetite as he vomited at times, his health improved.

He later joined the Nakuru Hospice family in October 2013, where he has received the necessary support that include pain management, symptoms control, psychosocial and spiritual support.

“This support has given me great hope for a better tomorrow,” says Paul.

Though there are many challenges he has encountered through this journey, he says the financial challenge was the greatest being the head of a young family and the sole bread winner.

Paul has a son in high school with school fees pressure and other basic needs while others children are in primary schools. He also has to buy drugs to support him.

Currently he has no source of income but lives to look for means of feeding the family despite his condition which has since improved while his wife works harder in a small business to top up their income and ensure life continues.

He says that attending day care activities at the Hospice makes him feel that he is not alone in this journey. “The Hospice staff has been very supportive, friendly and this makes me feel at home,” he says adding that this is one thing that makes him hopeful and feels life is worth living.

Paul has become an inspiration to other cancer patients especially those newly diagnosed as he encourages then that cancer is not a death sentence rather there’s always a better tomorrow. “A positive living with any condition is always promising,” he says.

He has been very active in Hospice activities. No one can believed that Paul is a cancer survivor. When he gave his testimony in a recent charity event, he moved many to tears as his story of struggle needs a person of strong will.

It is through well wishers from Kenya and beyond that Nakuru Hospice is able to offer quality palliative care to many like Paul.

Nakuru Hospice appreciates when they see all their cancer survivors active, strong and enjoying as their quality of life is improved to face challenges in life and live positively.