The Power of Palliative Care 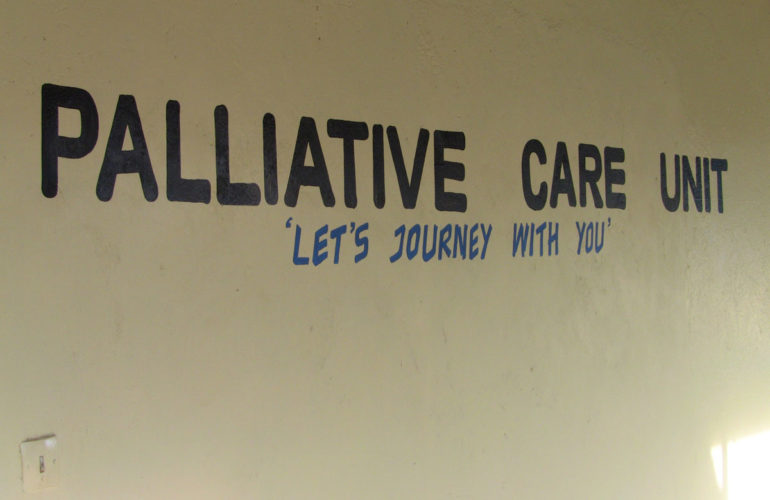 Flavia (not her real name) is a two and half year old girl, born in a family of 7 siblings and under the care of a single parent.

Despite her young age, she has suffered from three major life limiting illnesses namely HIV/AIDS, Tuberculosis and Cancer.

Symptoms to these illnesses range from high fever, pallor of the mucus membranes, swollen abdomen to swelling below the ears and jaw, leaving here agonising in pain.

Due to these symptoms, she has been a frequent patient to several hospitals, Homa Bay District Hospital being one of them.

In June 2013, the palliative team at Homa Bay district Hospital received a referral request from the Pediatrician requesting for their intervention and opinion into Flavia’s condition.

After introduction and gaining rapport with the two, we wanted to find out from the mother, some of the problems she may have been facing.

“Sister I have so many problems,” the mother said and paused.

We informed her that we may not be able to give her complete solutions to the problems but we could help her understand certain issues that may be enlightening.

She looked up, smiled and said, “I sold a bull and that is the money I have been using since I came to this hospital. My first born child who is in form three is at home taking care of the other children. I have been in this bed since April 2013. I have sent a message at home that they may sell a piece of land but they have not found a buyer yet and I have been asked to organize myself so that I take Flavia to Moi Teaching and Referral Hospital (MTRH) – 215km from Homa Bay – for further interventions. Flavia doesn’t want to eat the hospital food and she wants to see her brother and sisters. Nobody visits me from home. What do I do?” She narrated.

She was full of blame, having passed HIV to her daughter.

Flavia’s mother was very optimistic that her daughter would one day walk home healed and as the palliative care team at hand, we embarked on dealing with the case at hand.

After taking note of the agony Flavia’s mother was going through, we scheduled a counseling session with our new client.

The session involved disclosing and explaining the three conditions Flavia was suffering from to the mother.

The session was a difficult one, full of emotions and shedding of tears as the reality of the situation slowly sank into her. Despite the pain in her heart that could be seen on her face, she calmed down and the session was a success.

Results from the second session of counseling were evident in our next meeting with Flavia’s mother.

We could see smiles on her face. She had accepted the condition and stopped blaming herself for infecting her daughter.

One more task at hand was to inform the mother that this was a life limiting condition and that Flavia had few days to live. We had to give Flavia quality end of life care.

We explained to the mother that we can help Flavia in managing her pain and enable her have indoor games with other children.

Flavia needed to see her siblings, and to this, we informed the mother that could work on a bill waiver. In addition we would give Flavia food supplement from the nutrition department at the hospital when she goes home.

We could see the joy in Flavia’s hearth for she from time to time looked at us and smiled to her mother. We believe she was happy that she could finally see her brothers and sisters again.

Being a Friday, we promised to clear the remaining bit on Monday for the two to be free and head home, but not before morphine syrup was prescribed for Flavia to manage her pain.

She passed on that night.

On Monday as we came to work, Flavia’s mother met us crying as she broke the bad news of her daughter’s demise to us.

We comforted her at our office and she later appreciated the support that the palliative care team had offered within that short span of time.

“If I knew what I know now, I would not have spent a lot of money seeking treatment for my daughter. I would have kept her comfortable with the rest of her siblings at home.” She said.

We organized for transportation of the body home for burial.

The mother was able to explain to the other children and family members about Flavia’s illness and even managed to change beliefs in the community that Flavia was suffering as a result of witchcraft.

She informed them that Flavia was ailing from HIV/AIDS, Tuberculosis and Cancer.

Palliative care has seen patients and their relatives receive comfort when challenged with life threatening illnesses in the family and has been recognised by the Ministry of Health as a right in the National Patient’s Rights Charter 2013.

Also read Palliative care is…accepting that “death is part of life” published in the African edition.

Spread this great care by sharing it on Facebook, twitter, LinkedIn, Google+ or email to a friend using the tabs below.

On Wednesday 27 November all ehospice editions will be running a series of articles in which different people will explain what palliative care means to them. You can read all the articles in this series from the other editions by clicking on the links in the related articles section.