A journey from disability and loss to empowering and inspiring others 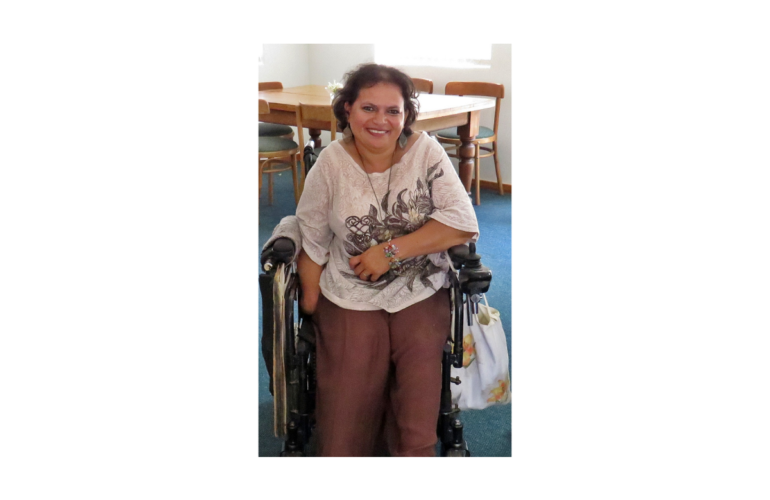 Melanie Viljoen was born with Athetoid Cerebral Palsy, which means that a nerve in her brain was damaged at birth, leaving her with severe movement disorder. She was assessed by the Red Cross Children’s Hospital, who at first thought she was mentally as well as physically disabled. Fortunately they were able to rule out any mental disability, and referred her to Eros School, who serve learners with Cerebral Palsy as well as those learners with Learning Difficulties.

Melanie started at Eros School at the age of 3 years old, living in the hostel. The staff at the hostel were kind and loving and treated her as if she was their own child. Her wheelchair became a part of her, allowing her mobility and a measure of independence.

Eros School has a very active extra mural sports program for their disabled learners, and when Melanie started grade 7, she became very involved in this, going on to qualify for the Western Province team. The excitement continued that first year with her breaking her first world record. The school was very supportive and Mrs Lambert, Melanie’s class teacher, became her coach. During her sports career, which ended in 1997 after she left school, Melanie broke many SA and World records, received a sports lady of the year award, accumulated 25 gold medals, and won a floating cup.

Melanie really loved being at Eros School – they made her dreams become a reality. On leaving school she received a bursary to study as an Admin Clerk at the Academy of Learning, passing her final exam with the highest pass rate in her class – 99%.

After graduating from the Academy of Learning, Melanie worked for six months as an admin clerk at an institution in Somerset West. After that she worked for Avroy Shlaine for four years, and completed a beauty course through them. She then worked for Watkins for two years.

Unfortunately, Melanie’s beloved Grandmother, with whom she lived, become very ill with cancer, and Melanie gave up her work in order to care for her. After her gran became a Helderberg Hospice patient in 2012, Melanie began attending their support group in Macassar daily for the moral support this provided. Sadly, her Grandmother passed away in 2014.

In Melanie’s own words, “the love and care the Hospice provided to me and my Grandmother during my Grandmothers illness, and after her passing, made a huge impact on me. They were there for us in every way and at any time we needed them. This inspired me to begin looking for ways of giving back to the community which involved Hospice”.

Melanie proudly became an official volunteer at Helderberg Hospice in Somerset West in November 2018. She makes beautiful bangles which are sold to raise funds for Hospice. As Melanie says, “I love volunteering at Helderberg Hospice – the people are very welcoming and I have made so many friends. I feel so at home there. It is also my way of honouring my Grandmother”.

Through her passion and heart for Hospice, Melanie inspires others in her community to help as well. Not only does this add purpose and meaning to their lives, she also empowers the younger generation by teaching them how to make bracelets and by helping and encouraging them with their schoolwork. Her motivation and positivity are beams of light in an environment in which it is so easy to become a victim of your circumstances. Melanie, we salute you!