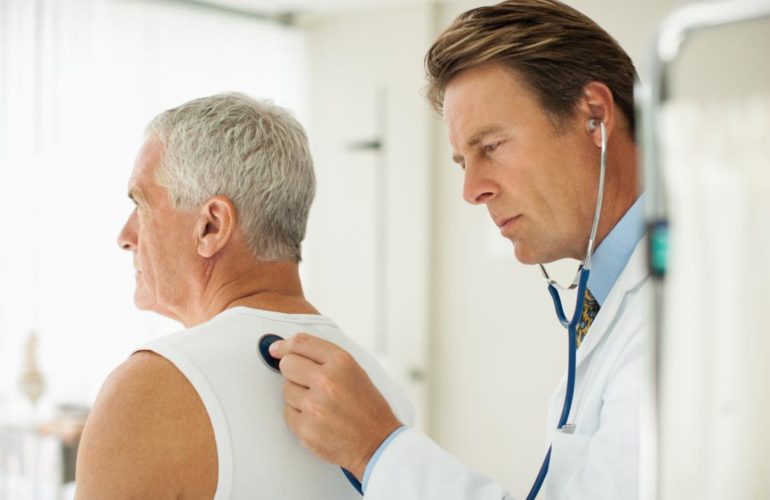 Breath sounds, also called lung sounds, are the noises that the structures in the lungs make when a person breathes in and out.

The normal sounds that people make when they breathe should hardly be noticeable.

However, abnormal breaths may sound strained, and odd noises may come from the lungs when the person inhales or exhales. These sounds are more apparent with a stethoscope, but some are loud enough to hear with the ears.

Abnormal breathing may be a sign of an underlying issue or medical condition. Infections and other conditions that cause inflammation or fluid buildup in the lungs commonly cause unusual breath sounds.

There are several distinct types of abnormal breath sounds, including:

Some abnormal breath sounds may also change the sound of a person’s voice.

Problems in the lungs or other airways are generally the cause of abnormal breath sounds. The type of breath sound may be different depending on the underlying condition.

Each type of breath sound has specific causes:

A doctor will use a stethoscope to listen to the individual’s lungs and air passages as they breathe. This will help to identify the type of abnormal breath sound and narrow down the potential causes.

Some doctors also use other listening tools, such as computerized lung sound analysis.

They may ask about any medication the person is taking or has taken recently. They may also ask when the symptoms began and if anything relieves or provokes them.

It is likely that a doctor will order other tests, including imaging tests such as a plain film X-ray or CT scan to look at the chest structures. They may also order blood tests to check for signs of underlying conditions.

If an infection is present, sputum testing may be necessary to diagnose the cause of abnormal breath sounds. For this test, a person must cough up some sputum, which a doctor will then send to a laboratory to check for infectious germs.

A pulmonary function test may help doctors determine if the airways are blocked or damaged. The test will measure how much air the person inhales and exhales and will show whether or not their breathing function is normal.

The treatment for abnormal breath sounds varies depending on the underlying cause and the severity of the person’s symptoms.

Infections may require antibiotic therapy or breathing treatments to help open up the airways.

In severe cases, a person may need to stay in the hospital. A case is likely to be severe when there is a serious infection or fluid in the lungs, the person has significant difficulty breathing, or there is a blockage in the airways.

People with chronic conditions may need regular medication and breathing treatments. For instance, people with asthma will often need to carry a rescue inhaler at all times in case of an asthma attack.

When to see a doctor

Anyone experiencing continuous abnormal breathing sounds should see a doctor for a proper diagnosis.

Abnormal breathing sounds often indicate common and treatable disorders. However, they may also be a sign of a more severe underlying condition.

It is essential to take anyone who is having problems breathing or who has stopped breathing to the emergency room.

In the emergency room, doctors will look for other signs of emergency conditions, such as:

People should speak to a doctor as soon as they notice abnormal breath sounds. Prompt diagnosis and treatment of the underlying cause will give them the best chance of avoiding further health complications.