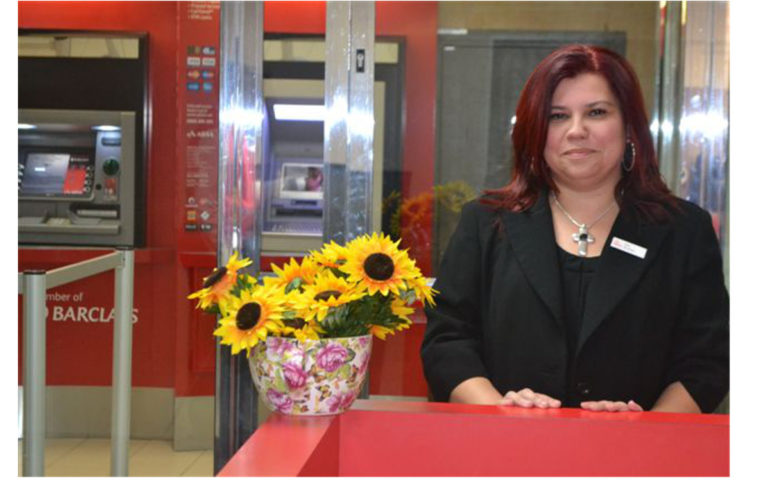 The Barclays Citizenship Awards recognise and celebrate colleagues for their amazing work in their local communities all around the world. The winners demonstrate passion and commitment, and take an innovative approach to addressing local issues and needs. Ana was nominated and is the only one representing South Africa amongst other countries.

Ana has spent the past 2 years championing support for cancer-relief initiatives and the provision of palliative care in order to bring dignity to those individuals suffering from terminal illnesses. The impact of Ana’s involvement has been felt on a social, financial and reputational level, both locally and nationally. Through her initial interaction with her clients, she encountered Mrs Shirley Rosencrown – an amazing woman who has been battling cancer, but refuses to succumb to the ravages of this disease.

Ana, who has always been excellent at engaging community networks soon realised that if she was to make a positive impact in the community that she was now serving – she would have to move closer to the causes that were important to this, predominantly senior market. Ana did not want her engagement to be “just another” CSI event but  wanted to involve her team and her clients and co-create something that could be repeated with relative ease and minimum effort. To this end, she started hosting what would later be called the Cancer Cup-a-thon. This concept involved a simple “tea party”, hosted by her and her team at the branch, during working hours whereby each staff member took turns to engage with customers. The branch would be decorated and cake and tea would be on sale for visitors to buy.

Ana’s initial Cancer Cup-a-thon raised R 1,600 and it was while she was searching for a suitable beneficiary that she stumbled across the Hospice Palliative Care Association (HPCA) of South Africa, who were based in her local community but had national reach in terms of the organisations that they supported with various cancer-relief initiatives and general palliative care. To date, Ana’s Own Cancer Cup-a-thon’s have raised over R 23,700 – just through the sale of a simple cup of coffee (tea) and a slice of cake in her branch. In addition to this, she has contributed to a ripple effect by actively promoting what she has been doing and inviting various regional and national stakeholders to her events. She has challenged other branches in the province to host similar events and has even managed to sell her concept to the Regional Executives of the other provinces in South Africa in order to generate a wave of support in multiple places.

Ana’s relationship with the HPCA will continue into the foreseeable future and in addition to this she has been connecting them to various other stakeholders in the province. The idea is to take this relationship and through a series of small wins, replicated across multiple touch points in the province, we can generate the critical mass required to contribute substantially to enhanced cancer research and improvement in the level of palliative care available. Ana has also learned that her clients and community will willingly support any such initiative when done in good faith and as such, future plans will also allow for a greater degree of collaboration and assistance from within the community in order to strengthen the impact of each individual event.