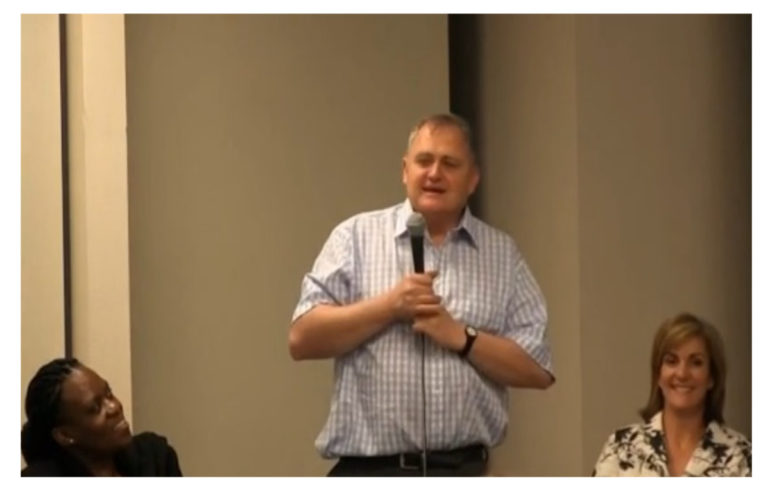 Still, the Haven Hospice in Gainesville, Florida, and Grahamstown Hospice – “twinned” as part of an initiative of the Foundation for Hospices in Sub-Saharan Africa (FHSSA) – have established a close relationship over the past eight years. Their connection deepened late last year, after the Haven invited three representatives of Grahamstown Hospice to visit its organisation in Florida and attend the annual conference of the US National Hospice Palliative Care Organisation.

The visit may only have spanned a week, but its impact on the local hospice will be felt for many years. From learning new dementia care strategies, to getting pointers on how to create homely patient spaces by “hiding” medical equipment, the experience was an revelation, says David Barker, director of Grahamstown Hospice.

While the American organisation has resources local hospices can only dream of, many of its initiatives can be implemented locally, David says. He was particularly impressed with the electronic training of hospice staff. This is ideal for the South African situation, where traditional face-to-face training – particularly the cost of transport and accommodation – is prohibitively expensive. Following his visit, Barker has encouraged the national hospice organisation to develop similar training programmes and after seeing the extensive information guides the Haven offers to patients and their families , he has embarked on creating similar “manuals” to help South Africans. The information will empower people to understand and cope with various aspects of their situation.

David says the very structured way that the American organisation approached everything from the cleaning and storing of medical equipment for use in patients’ homes to running their “attic shops” was impressive to behold. “We learned a lot about implementing procedures to make everything runs smoothly.” Even very small “best practices”– like taping remote controls to donated televisions as soon as they land in the shops – can make a big difference to efficiency, Barker says.

Given that the Grahamstown Hospice is expanding its own Sunflower shop, the South Africans was very interested in seeing how the Haven focuses on creating a retail experience similar to that in big US retail chains.Attending the US national hospice conference during their time in the Florida, and seeing how the Americans approach fund raising, inspired Sibongile Matambo, head of fundraising in Grahamstown. “I saw that every word counts, and how to communicate effectively.”

Trish Gillies of Grahamstown Hospice attended many of the sessions on clinical care. She was impressed by the advanced dementia research in the US and the care strategies that have been developed for these patients. “Dementia is an area of growing need in south Africa, and I would like to follow up on the information I gathered.” She was however very reassured by the sessions on pain management and end of life care, which showed that South Africa – despite its lack of resources – was faring well, “right on par with America, if not better”.

She was amazed to see how foreign HIV was within the American hospice community. “I thought that they would have HIV patients in their care. This is however not the case – most patients who enter the HIV programme stay on the treatment and do not default, thus leading to a healthy life, proving that anti-retroviral drugs do work.” Cancer, as well as obesity-related diseases, including strokes (cerebrovascular accidents) and renal failures due to diabetes, are some of the main focus areas in the US.

The Americans were hugely affected by the pictures and stories of venerable children in Grahamstown.” I realized then how we need to do more in SA,” says Trish. “We have grown so tired of fighting the fight with the policy makers that we just continue to put bandages over festering wounds, but the little children are the ones who pay the price.” Trish says most of the American hospice workers had amazing stories to tell of their missionary work in faraway places. “These trips are funded by themselves. They do it with love and compassion and are an incredibly God-abiding nation. America is the land of plenty and deservingly so. They are hard working , diligent and responsible for their portfolios .”

Representatives of the Haven plan to visit Grahamstown in September, and will also attend the national conference in South Africa. The American organisation is a major benefactor of Grahamstown Hospice and David is looking forward to show the Haven’s representatives how their donations are making a change in South Africa. “We also want to prove that – despite our constraints – we can find solutions to provide patient care in different, cost-effective  ways.”

David is also eager to return the kindness that they experienced in the US. “We were overwhelmed by their generosity of spirit and their deep respect for what we are doing. “They made us feel like we worth something and the work we do is important, which was a great encouragement.”