Hospice gave me back quality of life 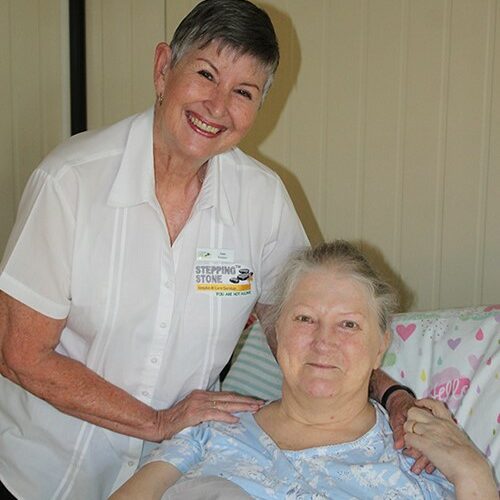 Nothing could possibly explain hospice care better than the testimony of one of Stepping Stone Hospice’s patients.

Mrs Margaret Smith (62), who after a few week’s stay in the In-Patient Unit, was recently discharged and sent home to spend some quality time with her family and her beloved Chichiwawa doggie, Pippa.

Mrs Smith, diagnosed with spinal cancer and lung cancer in September last year, was admitted to Stepping Stone Hospice in New Market Park in November 2018 after a stay in the Donald Gordon Oncology Unit in Parktown in Johannesburg.

“I just reached a point where I no longer wanted treatment in the form of radiations and chemo and tests upon tests,” says Mrs Smith. She’s been battling cancer since 2017 when she was diagnosed with kidney cancer. Originally from Richards Bay, her and her husband of 43 years, Basil, moved to her daughter in Mondeor in the south of Johannesburg when she was diagnosed in September with spinal cancer.

“I know hospice will not cure me, but they have given me back some quality of the life I have left and helped me regain my dignity,” she says. When Mrs Smith arrived at Stepping Stone Hospice, she couldn’t sit, not walk and was riddled with pain. “We were worried that I had suffered a stroke, I was that weak,” she says.

Within days, the special care she received from the hospice medical staff led to her being able to walk on her own, sit up and talk to her friends and family, and the symptoms such as the pain and nausea now under control. But mostly, she says, “they have helped me to come to grips with the fact that I am dying. The psycho-social support myself and my family received, helped us to a calmer and more peaceful place. We’ve accepted that I cannot be cured and that I will now make the most of the days I have left.”

Mrs Smith, who has two daughters, four grandchildren and one great-granddaughter, says that she may now finish the one thing she regrets never finishing, and that is a scrapbook for her granddaughter. “I loved doing scrap-booking, but the cancer robbed me of the energy to do that. But who knows, I may just pick up on this hobby of mine.”

“I know that I will come back to hospice and I made it very clear to my family that when the time comes, I should not be taken to a hospital, but straight back to Stepping Stone Hospice. I found my peace here, and I’ll spend my last days here,” she says. “I know that I, and my family, will be in good hands”, she says.