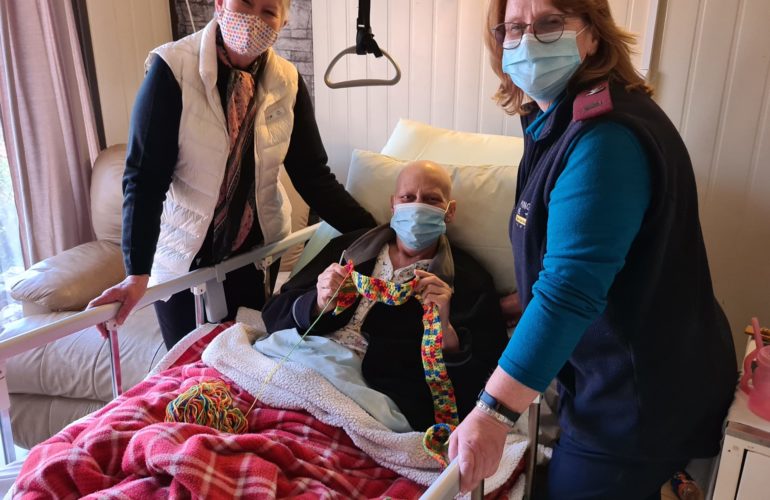 Her journey since the 19 th March this year, when she was placed in isolation in the ICU wards in the Netcare Union Hospital where she spent her days and nights on a ventilator, can only be described as severely traumatic.

Katrien is currently being cared for in the Stepping Stone Hospice In-Patient Unit in New Market
Park. Though she has fully recovered from the dreaded virus before being moved to the hospice, she
has not fully come to terms with what has happened to her and finds it difficult to talk about her
experiences, not just as a lung cancer patient, but as a Covid patient as well.

“I still cannot believe what this year has brought to my doorstep,” she says. She describes herself as
relatively healthy, but started coughing quite a bit in early March this year. “Treatment for sinus and
bronchitis did not help, and it was only once further tests were done, that I was diagnosed with
stage 3 lung cancer.”

“All I can remember, was that I was moved with a wheelchair to the ICU. I woke up three weeks later
not knowing what has happened to me. I was told that I was on a ventilator, fighting for my life.”
Katrien, a mother of two sons and grandmother to three, said that her biggest concern at the time
was that her family couldn’t visit her and she feared that they didn’t know what was happening to
her.
“When I woke up, I was partially paralysed, one of the effects of the virus. But not even that
frightened me as much as the fact that I couldn’t see or talk to my family,” she says. Katrien spend
another two weeks in isolation until she was given the all-clear and was then moved to Stepping
Stone Hospice on June 10.

“Though I was very scared to come to hospice initially, I cannot tell you how dramatically my health
and my mental state improved since being admitted here,” says Katrien. “Though there is also
restricted visiting hours here at hospice, my family can visit me at least once a day. The nursing staff,
physiotherapist and the psycho-social teams tend to all my needs, and I can watch the little birds in
the garden outside my room.”

According to Sister Margi Bollman, Care Services Manager at hospice, Katrien has shown remarkable
progress since admission. “We had to be sure that she recovered fully from Covid before we could
admit her. We continued with the specialized care she needed and it is heart-warming to see how
the sparkle in her eyes started coming back. She has been through a lot and I am grateful that we as
a team at Stepping Stone Hospice can now assist her on the rest of her journey,” says Sister Bollman.