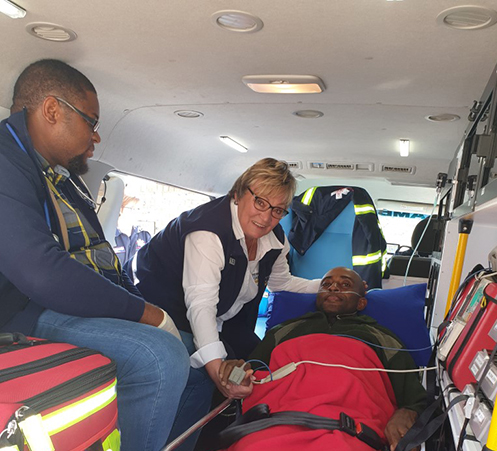 A 41-year old patient of Stepping Stone Hospice, Nchemty Ozongashu, has returned to his beloved homeland, Cameroon, after spending six weeks in the hospice’s In-patient Unit in New Market Park.

Nchemty, a worker for Green Peace, was diagnosed with Stage 4 lung cancer in January 2018 and after various treatments in Cameroon, he came to South Africa earlier this year to seek treatment and appropriate palliative care.

‘During his stay with us, we got to know a very intelligent man, a humble man with a very strong faith belief,” says Stepping Hospice sister, Margi Bollman.

“Two weeks ago he expressed a wish to return to Cameroon, and we started the planning to get him home. We believed that he was stable enough and after the various doctors who had treated him in South Africa, gave him the clearance to fly, the time came to say goodbye,” Sister Margi explains.

A doctor was flown in from Lagos to accompany Nchemty on his journey, a trip funded by his employers.

During his stay in the unit, Nchemty was supported by his uncle Philemon and his work colleagues from Green Peace. “We were sad to see him go but also grateful that we were able to help him return to his land, where he wants to spend his last days,” says Tersia Burger, CEO at Stepping Stone Hospice.