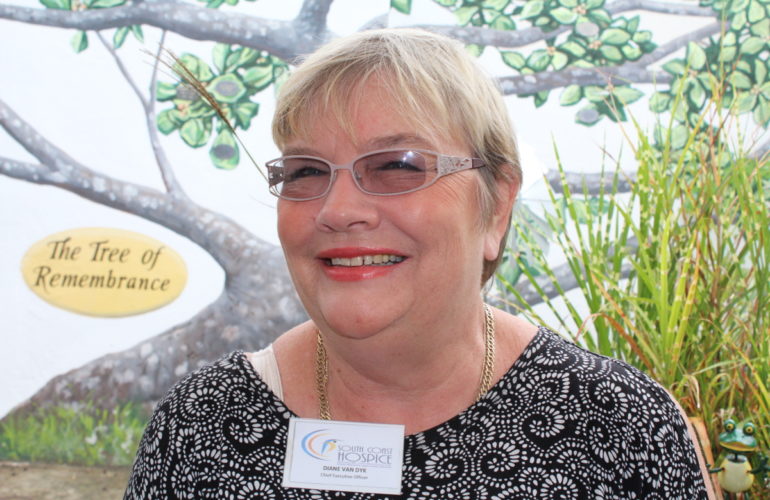 Before hospice, Diane came from a corporate background and before getting the permanent position at South Coast Hospice as CEO, she was serving on the South Coast Hospice board for 10 years. During those 10 years was when she really grasped the concept of hospice. However this was not from first-hand experience, but from the boardroom because her role was mainly in finance and budgeting because of her business background.

My first-hand experience of hospice

It was a great shock when she received the news that her husband was diagnosed with pancreatic cancer. It was then that her journey with hospice began in the true face to face reality, and her doctor said to her: ‘Diane, you and your family are starting a roller coaster ride.’ Di states that, that is exactly what it was; from different treatments; standing in queues waiting for results as well as Chemo. The rollercoaster took them on quite a ride.

This was when South Coast Hospice stepped in and offered a helping hand. “My husband was admitted quite a few times to South Coast Hospice for pain control & symptom control. He would stay for a couple of days and then stay home and be managed by the help of the sisters who would visit us through the home-based care concept. There was truly a strong support structure provided to us from South Coast Hospice.

Towards the end of my husband’s life, he was admitted into Kingfisher Inpatient – Unit (which is the in-patient unit in South Coast Hospice). The love and unconditional support given by this hospice was amazing. They allowed us to sit with my husband, there were no time restrictions of any sort. One of the greatest gifts I was given in my life was the ability to help nurse my husband towards the end of his life.” Diane stated.

After her husband passed on, his mother who was in her late 80’s, really had a difficult time dealing with the loss of her son, and it was at this time when the grief and bereavement team became involved and gave her a massive amount of support, care and love while she grieved.

South Coast Hospice and hospices in general provide support that most people struggle to understand or are even aware of.  Diane stated that she honestly owes so much to South Coast Hospice and that she is really blessed and grateful to be in a position where decisions can be made that will have a positive impact on spreading the word of the great work hospice do!

To find out more about South Coast Hospice visit: http://www.southcoasthospice.co.za/