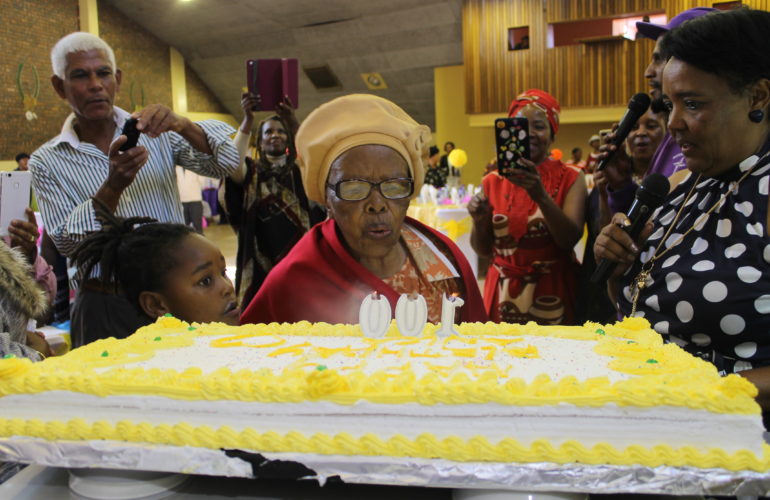 Enica Mogadi one of Ennerale’s oldest residents. The mother of 5 was born on the 23rd of August 1918, she was raised in Village Modjadji, Tzaneen. Ouma Enica is the second of 7 siblings and one of two that are still alive. She completed her schooling in the Modjadji area. Her passion for helping people propelled her to study nursing where she worked at the Non-European Hospital in Johannesburg, as well as in Sophiatown to care for children whose parents suffered from tuberculosis.

In the late 1950’s, Ouma Enica saw herself serving the community of Alexandra at the local hospital. Being a woman of many details, she also ventured into business where she became the owner of her own restaurant.

On the 23rd of August 2018, we celebrated the 100th birthday of Ouma Enica. Ladies of Hope an NPO in Ennerale alongside many other companies came together with our fundraising team that organised the auspicious event, that was successful thanks to our staff and the many others that assisted.

The donations from the community, SPAR in Eldo’s that sponsored the 100th birthday cake, the food was donated by Mr Chetty the father of one of our caregivers, the photography was done Studio X Media SA, the décor was done by Inkunzi Catering a local catering company in Ennerdale. We were graced with the presence of Mrs Grand SA and local radio presenters, Natalie and Nazeem, from Eldo’s fm.

Ouma Enica was blessed with many gifts including singing and dancing and special messages from family and friends. Inspirational words and heart touching messages from close relatives and many others who consider themselves her children almost brought the crowd to tears.

The evening ended with dancing and laughing and singing by the elderly guests that were invited. To many of us this event or rather party was an eye opener of how to live life truly with the key principles Ouma gave the youth that were present: Love, Respect and Fear God. This occasion was truly a blessed one.