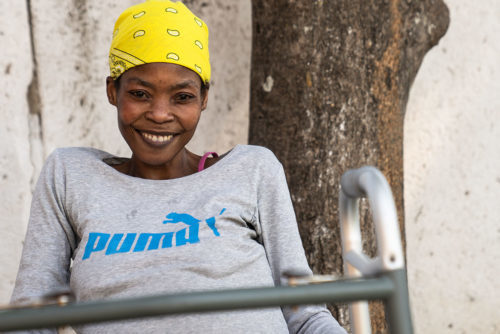 The WHPCA has submitted a film on the impact of palliative care to the World Health Organisation’s Health For All film festival.

“Roseline’s story” was made as part of the three year Patient Power project, supported by the Joffe Foundation which aimed to empower people with lived experience of palliative care, in two Anglophone African Low and Middle Income Countries, namely South Africa and Ethiopia, to demand quality palliative care for themselves and their family members as part of Universal Health Coverage.

Roseline’s film can be viewed here and her full story is as follows.

Bringing peace in a world of COVID-19

Roseline is 41 and lives in Nkowankowa Township in the Limpopo province of South Africa. 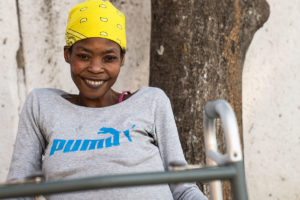 She has lived with cancer for a long time but had no diagnosis from the hospital although she first went there for help in 2010. By the time she was diagnosed with liver cancer, it had spread to her bones.  She lost the ability to walk and cried with the pain, unable to sleep because of it. Although she felt rejected by the hospital, they booked her an appointment with a doctor who referred her to CHoiCe, a health-based NGO providing palliative care, serving the rural population of the Mopani District.

Things were already difficult for Roseline, and when COVID-19 hit things got even harder. She was already too sick to work, she had two children and food became a problem, and she had no medication.

“Sister Jamela from CHoiCe brought me medication because during COVID-19 long lines of people waiting for assistance formed, and Roseline was unable to collect her medication herself. After two days I was pain free. 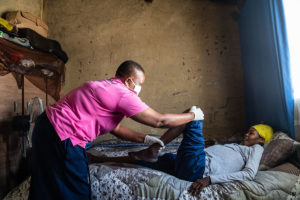 “I once had a breakthrough pain and sis Jamela realized that it was because I ran short of medication. She organized it for me and came to give me at home. The pain stopped. She explained that I need to take all the medication as prescribed, she also told me that if it happens that when my sister goes to collect the medication and find that some of the medication is not available, I must let her know so that she can make a plan because otherwise I will experience pain. Since then I make sure that I have all the medication and the pain is totally gone.”

During the lockdown CHoiCe Trust also gave me food parcels which benefited me and my family a lot; Jamela kept her promise to be with me through everything.

On the 10th of September 2020, it was my birthday. I requested my family to throw a small party to celebrate my improvement because by this month last year I was on death bed. I was in severe pain crying and screaming. My family agreed but have a problem of buying me a cake. I shared my birthday wishes with Antoinette and Jamela the day they came for photo shooting. I was surprised on the 10th of September to see sis Jamela bringing me a very huge cake that I never thought I will have. She told me that Antoinette bought me the cake. I was very happy and I would like to say thank you to Antoinette, sis Jamela and CHoiCe for the wonderful things that they did to me throughout this Journey. I know the cancer is still there, but I feel like I am healed”. 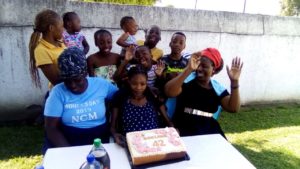 I was helped by CHoiCe to be where I am today. I would tell the minister of health that palliative care has helped me a lot. When I didn’t have hope of recovering they brought me medication and food parcels. Now I sleep peacefully.”

Roseline’s is one of 4 stories highlighting the positive impact of palliative care. You can find Ennie and Samuel’s story on the WHPCA website, and also view their message to the Minister of Health in South Africa.