The right way to say goodbye

Paarl in the Western Cape, South Africa is where Nelson Mandela was released from prison in February 1990, twenty-eight years ago. This story is about another release, the release of a child called Quinton who was from a poor neighbourhood in Paarl.

Quinton was given chemotherapy drugs, he was in and out of hospital for eight months. The last time he came out, he went back to school, but he was very weak, he could not play football anymore. He  was brave but the cancer came back, they tried to cut it out from his leg and arm, it is so terrible to see your child suffer. After that surgery it was too much, his heart grew weak. The second blow came when they said Quinton was probably not going to survive. We brought him home but I was not coping, I could not believe this was happening to my only son, he was my child – he was full of life. The hospital asked the hospice team to visit our home. The hospice counsellor spoke with us often, she also spoke privately with Quinton. Quinton told the counsellor he understood he was dying but he did not want to go back to hospital. He said he was worried about us [his family] because we were so sad and he did not know how to comfort us. What he wanted was to help us let him go.

Quinton is one of the 21 million children, globally, requiring palliative care. Of this number 98% are situated in low- to middle-income countries such as South Africa, Kenya and Uganda (World Bank Country & Lending Groups 2018; Downing et al 2018). And in sub- Saharan Africa the likelihood of a child accessing palliative care in a resource poor setting is overwhelmingly limited. These disparities in care between sub-Saharan countries and high- income countries are a concern for palliative care specialists and advocates alike; particularly in light of the global call for Universal Health Coverage (UHC). Nonetheless despite the fact that Quinton is a child living in sub-Saharan Africa, he is better off than many other children in the region because he lives in an area where care is available from a hospice team, a non- governmental organisation involved in advancing paediatric palliative care in a disadvantaged neighbourhood in Western Cape.

For Quinton a hospice team was soon mobilised because he lived in an area where a hospice and local hospital shared a networking relationship. Once hospice received a referral from the hospital a qualified palliative care nurse came to Quinton’s home to assess his level of pain. The nurse in collaboration with the hospital’s paediatric palliative doctor drew up a care plan to manage his symptoms and his pain, so he was comfortable. Quinton’s loss of weight, appetite and energy was a concern for his mother, so the team discussed Quinton’s food preferences with the family and a plan was drawn up.

The support provided by the hospice team was both medical and psychosocial, helping the family to cope with overwhelming feelings of loss and uncertainty and helping Quinton with his physical, emotional and spiritual needs. This highlights the fact that palliative care is always best if provided by a multi-disciplinary team with an inter-disciplinary approach.

This integrated approach to health care is reinforced by the commitment to UHC in the UN Sustainable Development Goals (SDGs). In terms of UHC there is a call for equal access to good quality health services for those in need, no matter their financial circumstances. This shift in approach and the move toward greater equality extends to the provision of palliative care for seriously ill children who are ‘arguably some of the most vulnerable people within a population’ (Downing et al 2018).

This recognition of the right to PPC is an important step toward acknowledging specific vulnerabilities and the needs of a child living with a serious illness. But the reality is that such recognition does not automatically translate into addressing needs and proof of commitment lies in the allocation of human and capital resources aimed at relieving pain and suffering. State Parties have a responsibility to ensure that no child, living with a serious illness or condition, is deprived of his or her right to access the necessary health-care services and should not be subjected to further suffering due to the State Parties failure. The call for access to palliative care was recognized by the UN Committee on the Rights of the Child which welcomed the commitment of Belarus to palliative care for children and the country’s adoption of an Order on Child Palliative Care. The question remains, who will make this change happen?

In reality this means that, for Quinton’s family, the care they received provided a network of support. His father said knowing there was someone close, who visited, cared and gave advice, made the time at home very special and they could relax and enjoy each other’s company. The hospice social worker had family meetings and many chats with Quinton about his illness, fears, hopes and dreams. Quinton and his mother had open and honest conversations about dying and the future. Quinton needed to be busy so home-caregivers in the area, visited often, with playful banter and board games. The hospice teacher helped with school-projects, new games and crossword puzzles. The physiotherapist kept Quinton mobile with exercises and taught these to the home-carers. Quinton loved swimming, so almost every Saturday his family took him to the local swimming pool. The hospice mobilized resources to improve his quality of life.

This is not the case for many children who, on a daily basis, are confronted with enormous challenges. In sub-Saharan Africa there is limited commitment from States to improve children’s access to palliative care and pain relief. This is made worse by a lack of people with specialised skills and limited or inadequate resources. States often rely on a few NGOs for palliative care, but these NGOs are not sufficient to meet the need from communities and children living within these communities. Quinton was one of the fortunate ones able to receive compassionate, holistic care from a local hospice team. Where there are limited to no resources, families cannot access counselling to comfort their child or themselves, they cannot access morphine to relieve pain and they cannot access knowledgeable healthcare practitioners to manage symptoms. An integral part of palliative care treatment is both the prevention and relief from pain and suffering, without pain relief medication children will suffer needlessly. Effective and inexpensive pain medications do exist, however there are far too many challenges and barriers preventing children from accessing this relief.

A pressing reality is that in an environment where health services are inadequate individuals living with severe pain will be unable to access urgently required pain relief medication. This barrier to access pain relief medication coupled with a lack of commitment by governments to address the gaps in a health care system negates the intention to deliver the best affordable drugs to those in need, constituting, in terms of the Universal Declaration of Human Rights (UDHR) ‘cruel, inhuman or degrading treatment or punishment’.

To prevent the misuse of controlled substances, such as morphine and other opioids, many African countries implement stringent control measures. Instead of adopting a public health program which utilises a human rights approach when treating pain, in particular, and palliative care in general, these countries focus on laws and policies aimed at prevention of drug abuse. In Kenya and South Africa laws and practices controlling the prescribing of pain relief medication ensure, through legislation, that only trained medical practitioners or dentists can prescribe specific forms of medication. When the lack of access to pain relief medication is coupled with the exodus of medical doctors from rural areas — more than 80% of doctors in the continent have relocated to major towns — this introduces unnecessary hardship for many children living in rural areas.

Unlike Quinton, many children struggle to receive the necessary care and access pain relief medication because the hidden side of child suffering remains unnoticed. This ‘hidden suffering’ underlies many implementation failures despite broad policy frameworks, programmes and plans developed at a national and international level. What makes this situation worse is the fact that there is limited data indicating the number of children in need and the number of resources in certain areas. This means neither civil society, government nor the international community have a clear understanding of the extent of the problem. Kofi Anan warns us against this saying that, ‘[d]ata gaps undermine our ability to target resources, develop policies and track accountability. Without good data we are flying blind. If you can’t see it, you can’t solve it’ (Kofi Annan, Nature, 2018).

The time is ripe for policy makers to reconsider existing practices and to start taking definitive steps toward removing the anomalies introduced through restrictive legislation. To do this the interests of multiple sectors must be considered. This calls for effective dialogue between all stakeholders — from health professionals and patients to law enforcers and policy makers. Through open dialogue misconceptions and assumptions may be revealed, allowing an improvement in shared meaning between different sectors.

Advocates for palliative care call on countries to ensure State involvement asking for improved resource allocation, the removal of barriers to increase access and the utilisation of evidence- based or evidence-informed interventions. We also state that both governmental and non- governmental institutions, such as Human Rights Commissions and organisations, similar to the African Committee of Experts on the Rights and Welfare of the Child (ACERWC) and UNICEF, need to play a role in bringing these issues to the fore. Offices such as the National Child Council (NCC) in Uganda and the Human Rights Commission in both South Africa and Kenya should partner with government and civil society in determining palliative care needs and in monitoring implementation of policies introduced by governments in terms of the international policy framework. 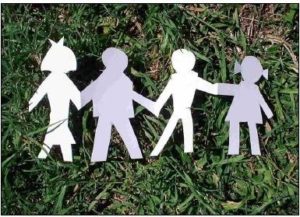 If Quinton did not have the opportunity to receive care from the multidisciplinary hospice team the story could have ended in a very different way. Although Quinton’s life was not the life his family would have chosen for him, the loving, compassionate care received from the hospice team made his illness and his final passing more bearable for both Quinton and his family. Quinton was able to die in dignity, at home, surrounded by those he loved.