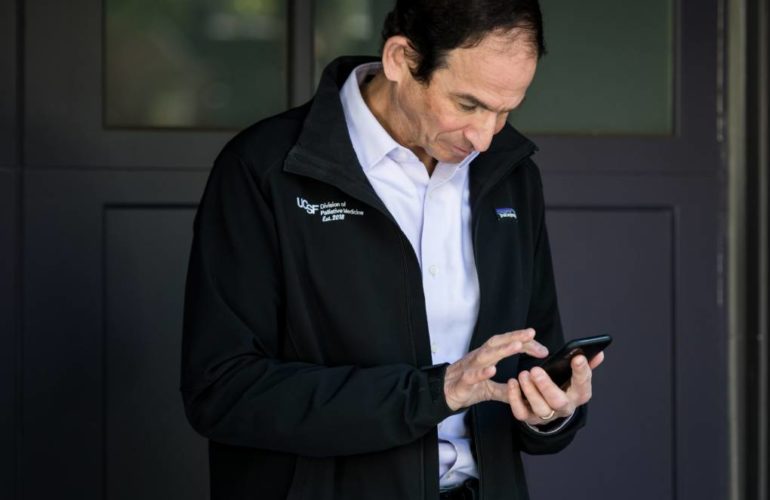 Steve Pantilat was in medical school and residency training in San Francisco at the peak of the AIDS crisis.

“While that was a different type of pandemic, there are a lot of echoes of that, of an illness we can’t treat, of people dying, a lot. Young people dying,” he said.

Back in the 1980s, health workers knew they could contract HIV from accidental needle sticks. The risk of contagion with coronavirus is very different.

Pantilat became a pioneer in palliative medicine, shepherding patients through serious illness and the dying process. He founded, and now directs the palliative care program at UCSF, where he’s setting the protocols that are guiding how the first generation of COVID-19 patients dies.

Compared to AIDS, this is much more personal.

“My wife and I are both in our 50s,” Pantilat said. “That is a higher risk group for serious complications, including dying of COVID-19. So in our house at least, we think about this a lot because of the work that I do and my wife does, but it’s much more tangible now.”

“All the clothes go directly in the washing machine. She goes to the shower first thing. We then wipe down every door knob and surface that she touched on the way in the house. And then, we say hello.”Dr. Steve Pantilat, chief of palliative care at UCSF

Pantilat’s wife is also a doctor. She’s been on the front lines in the hospital, caring for COVID-19 patients. The concern with carrying the infection home has led to some elaborate routines.

“She undresses in the garage, leaves her shoes there, wipes everything down, including the car, her shoes, her stethoscope,” Pantilat said. “She comes into the house, undressed — all the clothes go directly in the washing machine. She goes to the shower first thing. We then wipe down every door knob and surface that she touched on the way in the house. And then, we say hello.”

Pantilat, on the other hand, has been protecting himself and his team by working almost exclusively from home, doing his consults over video. While doctors would normally sit on the side of a patient’s bed and hold their hand when delivering bad news, now, all patients have to hold is an iPad.

“In order to limit exposure of our staff and to preserve the personal protection equipment, we’ve decided that we will see patients as much as we can by telemedicine, even for patients in the hospital,” he said.

Family and visitors are limited to video and phone calls, too. This is hard for doctors like Pantilat, who have made it their life’s work to honor peoples’ last wishes.

“I’ve been in rooms where there are 35 family members, people are playing music and holding a vigil and saying prayers and singing,” he said. “They’re even having weddings in the hospital. Just last month, we had another wedding for someone who was dying.”

But in the age of coronavirus, all that is out. There’s too much risk of visitors getting sick and there aren’t enough masks to go around. So the new policy at UCSF is one visitor, and only for patients who are actively dying.

“We’ve never really faced this before of trying to make these really kind of gut wrenching decisions about visitation and when and who and how many,” he said. “I think that’s really, really, really distressing for everyone involved.”

Many of these kinds of decisions are rushed right now. In some cases, COVID-19 can progress so fast, there’s not enough time for a considered conversation with patients about what kind of care they’re willing to have, what’s important to them, and what they want for the end of their lives. Pantilat says we should all be having these conversations with our loved ones now.

“Some of us who might not have thought about these issues and thought, ‘Oh, I’ve got a lot of time before I have to worry about this,’ are suddenly facing the reality that you could get suddenly sick and suddenly very, very sick,” he said.

Just in case, we should all be saying our goodbyes.

“No harm in saying, I love you and thank you and forgive me and I forgive you to the people you care about at any time,” he says. “It’s a really good time to do that now.”

But not all doctors take their own advice. “Good friends of ours sent us a, this sort of letter about, if both of them die, you know, asking us to be sort of official godparents to their three children,” Pantilat said.

Pantilat and his wife have two kids. The oldest is grown, but his younger son is 16 and still at home. They don’t have a plan for him. Neither of them have a will.

“We’ve talked about it, we have this sort of informal will. We have life insurance, we’ve gone that far,” he says. “But it’s a little embarrassing, as someone who takes care of people who are seriously ill, to say that we don’t have a will, but we don’t have one yet.”

Even now, with the haunting pressure of a fatal pandemic, Pantilat wavers. He sighs. He can’t bring himself to write an official plan for his own end.

“You know, probably like a lot of people, there’s a little bit of denial, too, like, is this really going to happen to both of us at the same time in the next few months?” he said. “It’s very sobering to get just this very small taste of what I imagine my seriously ill patients must be thinking about all the time.”

Original article can be found here.