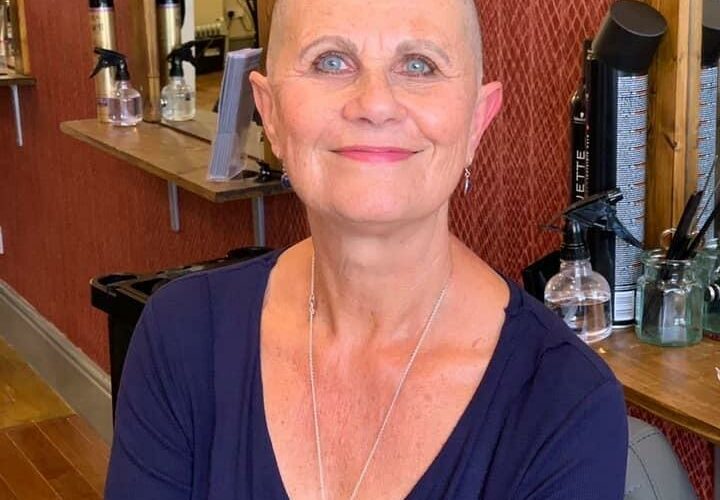 A WOMAN who helps to raise vital money for St Mary’s Hospice has braved the shave to show support for friends and family affected by cancer.

Linda Postlethwaite has raised more than £3,000 for the Ulverston hospice after losing her son Ian to the illness at the age of 26.

Mrs Postlethwaite, who works at Sterling Lotteries, said cancer claimed the life of a colleague last year, and another, Lisa McSweeney, is undergoing chemotherapy.

“Lisa’s the most wonderful person you could ever wish to meet, but she got the diagnosis and is undergoing treatment,” she said.

“Knowing the chemo would make her lose her hair planted the seed for me to do something.

“Even though she’s not well she does a lot of fundraising herself, she’s just brilliant.

“Lisa is a fighter. So brave and so funny, she’s the hero.”

Mrs Postlethwaite said donations have been flooding in from across the world.

“I can’t believe how many people got behind it,” she said.

“My grandchildren are calling me Mrs Baldy.

“I never thought I would raise so much with this.

“I’ve been getting donations from everywhere, across the country, even New Zealand, Africa and beyond. It’s incredible.

“We did it as a live streamed event, I went to Salon SA in Walney and they were brilliant. We got their full support. We filmed it on Facebook and it was really fun. It feels like Velcro now.”

She said she had been overwhelmed by how much has been raised.

“We are also expecting a donation from my sister’s company which is so generous.

Chemotherapy may cause hair loss all over a patient’s body.

An estimated 65% of people who undergo Chemotherapy will lose their hair.

To support Linda and her cause visit justgiving.com/fundraising/linda-postlethwaite.